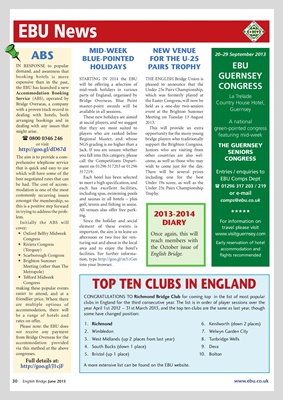 ABS BLUE-POINTED FOR THE U-25

IN RESPONSE to popular

demand, and awareness that

expensive than in the past, will be offering a selection of pleased to announce that the

the EBU has launched a new mid-week holidays in various Under 25s Pairs Championship, CONGRESS

Accommodation Booking parts of England, organised by which was formerly played at

Bridge Overseas. Blue Point the Easter Congress, will now be

with a proven track record in available in all sessions. event at the Brighton Summer Guernsey

dealing with hotels, both These new holidays are aimed Meeting on Tuesday 13 August

arranging bookings and in at social players, and we suggest 2013. A national

might arise. players who are ranked below opportunity for the many young featuring mid-week

or visit NGS grading is no higher than a support the Brighton Congress. THE GUERNSEY

http://goo.gl/dD67d Jack. If you are unsure whether Juniors who are visiting from

you fall into this category, please other countries are also wel-

The aim is to provide a com- CONGRESS

prehensive telephone service call the Competitions Depart- come, as well as those who may

which will have some of the 317219. There will be several prizes Entries / enquiries to

be had. The cost of accom- to meet a high specification, and Under 19s score, as well as the

modation is one of the most

amongst the membership, so and saunas in all hotels – plus comps@ebu.co.uk

this is a positive step forward golf, tennis and fishing in some.

Since the holiday and social For information on

Initially the ABS will

element of these events is

important, the aim is to leave an

afternoon or two free for ven-

Once again, this will www.visitguernsey.com

turing out and about in the local

area and to enjoy the hotel’s the October issue of

Meeting (other than The

easier to attend, and at a

friendlier price. Where there CONGRATULATIONS TO Richmond Bridge Club for coming top in the list of most popular

are multiple options of clubs in England for the third consecutive year. The list is in order of player sessions over the

be a range of hotels and some have changed position:

Please note: the EBU does

from Bridge Overseas for the 3. West Midlands (up 2 places from last year) 8. Tunbridge Wells