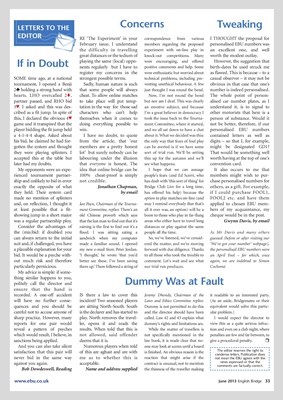 LETTERS TO THE Concerns Tweaking

February issue, I understand members regarding the proposed personalised EBU numbers was

the difficulty in travelling experiment with on-line play in an excellent one, and well

great distances or the tedium of knock-out competitions. Many worth the modest outlay.

If in Doubt playing the same (local) oppo-

nents regularly but I have to

were encouraging, and offered

positive comments and help. Some

However, the suggestion that

birth-dates be used struck me

register my concerns in the were enthusiastic but worried about as flawed. This is because – to a

SOME time ago, at a national strongest possible terms. technical problems, including pre- casual observer – it may not be

tournament, I opened a Benji Sadly, human nature is such venting unethical behaviour. A few obvious in that case that one’s

2® holding a strong hand with that some people will always just thought I was round the bend. number is indeed personalised.

hearts. LHO overcalled 2t, cheat. To allow online matches Now, I’m not round the bend The whole point of person-

partner passed, and RHO bid to take place will put temp- but nor am I deaf. This was clearly alised car number plates, as I

3™. I asked and this was des- tation in the way for those sad an emotive subject, and because understand it, is to signal to

cribed as a fit jump. In spite of characters who can’t help I’m a great believer in democracy I other motorists that here is a

this, I declared the obvious 4™ themselves when it comes to took the issue back to the Tourna- person of substance. Would it

game and it transpired that the doing everything possible to ment Committee, where it started, not be better, therefore, if our

player bidding the fit jump held win. and we all sat down to have a chat personalised EBU numbers

a 4-1-4-4 shape. Asked about I have no doubt, to quote about it. What we decided was this: contained letters as well as

his bid, he claimed he had for- from the article, that ‘our the only way that fears of foul play digits – so that I, for example,

gotten the system and thought members are a pretty honest can be averted is if we have some might be designated GD1?

they were playing splinters. I lot’ but surely nobody can be sort of trial run. We’ll be setting That would be something well

later had my doubts. that everyone is honest. The see what happens. convention card.

ship and unlikely to bid in error not credible. has dealt with ‘this sort of thing’ for chase personalised numbers for

exactly the opposite of what Jonathan Chapman, Bridge Club Live for a long time, others, as a gift. For example,

they held. Their system card by email has offered his help) because the if I could purchase FOOL1,

made no mention of splinters option to play matches on-line (and FOOL2 etc. and have them

and, on reflection, I thought it Ian Payn, Chairman of the Tourna- may I remind everybody that that’s applied to chosen EBU mem-

at least possible that a fit- ment Committee, replies: There’s an all it ever was, an option) will be a bers of my acquaintance, my

showing jump in a short major old Chinese proverb which says boon to those who play in far-flung cheque would be in the post.

was a regular partnership ploy. that the last man to find out that it’s areas who either have to travel long Gwynn Davis, by email

the (mis)bid: if doubled you flood. I was sitting eating a people all the time. As Mr Davis and many others

can always return to the initial sandwich when my computer So, we’ve listened, we’ve consid- guessed (before or after visiting our

suit and, if challenged, you have made a familiar sound. I opened ered the matter, and we’re moving ‘We’ve got your number’ webpage),

a plausible explanation for your my new e-mail from Peter Jordan. forward with due diligence. Thanks the personalised EBU numbers were

bid. It would be a psyche with- ‘I thought,’ he wrote ‘that you’d to all those who took the trouble to an April Fool – for which, once

out much risk and therefore better see these. I’ve been saving comment. Let’s wait and see what again, we are indebted to Simon

particularly pernicious. them up.’ There followed a string of our trial run produces. Cochemé.

My advice is simple: if some-

thing similar happens to you,

politely call the director and Dummy Was at Fault

ensure that the hand is

recorded. A one-off accident IS there a law to cover this Jeremy Dhondy, Chairman of the it readable to an interested party.

will have no further conse- incident? Two seasoned players Laws and Ethics Committee replies: (As an aside, Bridgemates or their

quences and you should be are sitting North-South. South Dummy is not permitted to do this equivalent would solve this partic-

careful not to accuse anyone of is the declarer and has started to and the director should have been ular problem.)

sharp practice. However, many play. North removes the travel- called. Law 42 and 43 explain what I would expect the director to

reports for one pair would ler, opens it and reads the dummy’s rights and limitations are. view this as a quite serious infrac-

reveal a pattern of psyches results. When told that this is While the matter of travellers is tion and even on a club night, where

which would result, I believe, in not allowed, said offender not specifically mentioned in the penalties are few and far between, to

sanctions being applied. deems that it is. law book, it is made clear that no- give a procedural penalty. r

satisfaction that this pair will of this are aghast and are with is finished. An obvious reason is the The editor reserves the right to

against you again. acceptable. contract is unusual, not to mention views expressed or that the

Bob Dowdeswell, Reading Name and address supplied the thinness of the traveller making