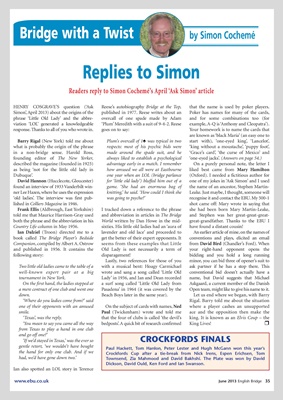 HENRY COSGRAVE’S question (‘Ask Reese’s autobiography Bridge at the Top, that the name is used by poker players.

Simon’, April 2013) about the origins of the published in 1977. Reese writes about an Poker has names for many of the cards,

viation ‘LOL’ generated a knowledgeable ‘Plum’ Meredith with a suit of 9-4-2. Reese example, A-Q is ‘Anthony and Cleopatra’).

response. Thanks to all of you who wrote in. goes on to say: Your homework is to name the cards that

are known as ‘black Maria’ (an easy one to

Barry Rigal (New York) told me about Plum’s overcall of 1´ was typical in two start with), ‘one-eyed king’, ‘Lancelot’,

what is probably the origin of the phrase respects: most of his psychic bids were ‘king without a moustache’, ‘puppy foot’,

in a non-bridge sense. Harold Ross, made around the spade suit, and he ‘Grace’s card’, ‘the curse of Mexico’ and

described the magazine (founded in 1925) advantage early in a match. I remember On a purely personal note, the letter I

Dubuque’. one year when an LOL (bridge parlance (Oxford). I needed a fictitious author for

David Hannon (Hucclecote, Gloucester) for ‘little old lady’) bluffed him out of a one of my jokes in ‘Ask Simon’ and I used

found an interview of 1933 Vanderbilt win- game. ‘She had an enormous bag of the name of an ancestor, Stephen Martin-

ner Lee Hazen, where he uses the expression knitting,’ he said. ‘How could I think she Leake. Just maybe, I thought, someone will

‘old ladies’. The interview was first pub- was going to psyche?’ recognise it and contact the EBU. My 500-1

lished in Colliers Magazine in 1946. shot came off: Mary wrote in saying that

Frank Ellis (Aldbrough, East Yorkshire) I tracked down a reference to the phrase she had been born Mary Martin-Leake,

both the phrase and the abbreviation in his World written by Dan Howe in the mid- great-grandfather. Thanks to the EBU I

Country Life column in May 1956. sixties. His little old ladies had an ‘aura of have found a distant cousin!

Ian Dalziel (Troon) directed me to a lavender and old lace’ and proceeded to An earlier article of mine, on the names of

book called The Bridge Player’s Bedside get the better of their expert opponents. It conventions and plays, elicited an email

Companion, compiled by Albert A. Ostrow seems from these examples that Little from David Bird (Chandler’s Ford). When

and published in 1956. It contains the Old Lady is not necessarily a term of your right-hand opponent opens the

following story: disparagement! bidding and you hold a long running

Lastly, two references for those of you minor, you can bid three of opener’s suit to

Two little old ladies came to the table of a with a musical bent: Hoagy Carmichael ask partner if he has a stop there. This

tournament in New York. Lady’ in 1936, and Jan and Dean recorded name, but David suggests that Michael

On the first hand, the ladies stopped at a surf song called ‘Little Old Lady from Askgaard, a current member of the Danish

a mere contract of one club and went one Pasadena’ in 1964 (it was covered by the Open team, might like to give his name to it.

down. Beach Boys later in the same year). Let us end where we began, with Barry

‘Where do you ladies come from?’ said Rigal. Barry told me about the situation

one of their opponents with an amused On the subject of cards with names, Ned where a player cashes an unsupported

smile. Paul (Twickenham) wrote and told me ace and the opposition then make the

‘Texas’, was the reply. that the four of clubs is called ‘the devil’s king. It is known as an Elvis Coup – the

‘You mean to say you came all the way bedposts’. A quick bit of research confirmed King Lives! r

from Texas to play a hand in one club

‘If we’d stayed in Texas,’ was the ever so CROCKFORDS FINALS

the hand for only one club. And if we Crockfords Cup after a tie-break from Nick Irens, Espen Erichsen, Tom

had, we’d have gone down two.’ Townsend, Zia Mahmood and David Bakhshi. The Plate was won by David