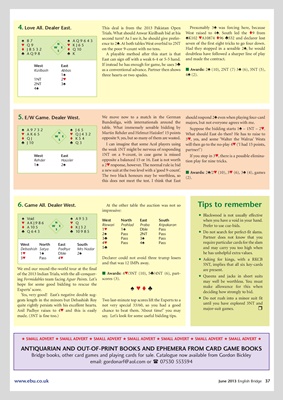 4. Love All. Dealer East. This deal is from the 2013 Pakistan Open Presumably 3´ was forcing here, because

Trials. What should Anwar Kizilbash bid at his West raised to 4´. South led the t9 from

™ KJ65 ence to 2´. At both tables West overbid to 2NT seven of the first eight tricks to go four down.

West East If instead he has enough for game, he uses 3®

5. E/W Game. Dealer West. We move now to a match in the German should respond 2´ even when playing four-card

Bundesliga, with internationals around the majors, but not everyone agrees with me.

™ QJ432 Martin Rehder and Helmut Haüsler! 15 points What should East do then? He has to raise to

the weak 1NT might be nervous of responding partner!’)

West East 1NT on a 9-count, in case game is missed If you stop in 3™, there is a possible elimina-

Rehder Haüsler opposite a balanced 15 or 16. East is not worth tion play for nine tricks.

a new suit at the two level with a ‘good 9-count’.

The two black honours may be worthless, so

this does not meet the test. I think that East

6. Game All. Dealer West. At the other table the auction was not so Tips to remember

a void in your hand.

t KJ32 Prefer to use cue-bids.

2´ Pass 2NT Pass • Do not search for perfect-fit slams.

Partner does not know that you

• Asking for kings, with a RKCB

5NT, implies that all six key-cards

We end our round-the-world tour at the final are present.

may well be worthless. You must

hope for some good bidding to rescue the

make allowance for this when

until you have explored 3NT and

quite rightly persists with his excellent hearts. not very special 33/60, so you had a good

Anil Padhye raises to 4™ and this is easily chance to beat them. ‘About time!’ you may major-suit games. r

made. (3NT is fine too.) say. Let’s look for some useful bidding tips.