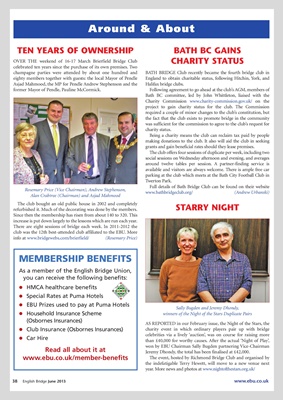 celebrated ten years since the purchase of its own premises. Two

eighty members together with guests: the local Mayor of Pendle England to obtain charitable status, following Hitchin, York, and

Asjad Mahmood, the MP for Pendle Andrew Stephenson and the Halifax bridge clubs.

former Mayor of Pendle, Pauline McCormick. Following agreement to go ahead at the club’s AGM, members of

Bath BC committee, led by John Whittleton, liaised with the

Charity Commission www.charity-commission.gov.uk/ on the

project to gain charity status for the club. The Commission

required a couple of minor changes to the club’s constitution, but

making donations to the club. It also will aid the club in seeking

grants and gain beneficial rates should they lease premises.

The club offers four sessions of duplicate per week, including two

social sessions on Wednesday afternoon and evening, and averages

around twelve tables per session. A partner-finding service is

available and visitors are always welcome. There is ample free car

The club bought an old public house in 2002 and completely

refurbished it. Much of the decorating was done by the members. STARRY NIGHT

Since then the membership has risen from about 140 to 320. This

increase is put down largely to the lessons which are run each year.

club was the 12th best-attended club affiliated to the EBU. More

As a member of the English Bridge Union,

you can receive the following benefits:

(Osbornes Insurances) AS REPORTED in our February issue, the Night of the Stars, the

celebrities via a lively ‘auction’, was on course for raising more

Read all about it at Jeremy Dhondy, the total has been finalised at £42,000.

www.ebu.co.uk/member-benefits The event, hosted by Richmond Bridge Club and organised by

the indefatigable Terry Hewett, will move to a new venue next