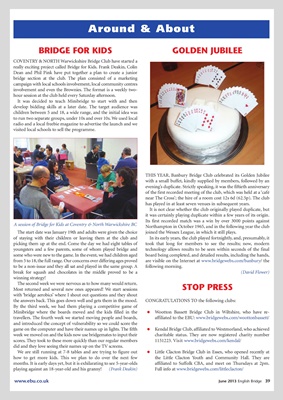 bridge section at the club. The plan consisted of a marketing

involvement and even the Brownies. The format is a weekly two-

hour session at the club held every Saturday afternoon.

It was decided to teach Minibridge to start with and then

develop bidding skills at a later date. The target audience was

children between 5 and 18, a wide range, and the initial idea was

to run two separate groups, under 10s and over 10s. We used local

with a small buffet, kindly supplied by members, followed by an

evening’s duplicate. Strictly speaking, it was the fiftieth anniversary

of the first recorded meeting of the club, which was held at a ‘café

has played in at least seven venues in subsequent years.

It is not clear whether the club originally played duplicate, but

it was certainly playing duplicate within a few years of its origin.

A session of Bridge for Kids at Coventry & North Warwickshire BC Northampton in October 1965, and in the following year the club

The start date was January 19th and adults were given the choice joined the Wessex League, in which it still plays.

of staying with their children or leaving them at the club and In its early years, the club played fortnightly, and, presumably, it

picking them up at the end. Come the day we had eight tables of took that long for members to see the results; now, modern

youngsters and a few parents, some of whom played bridge and technology allows results to be seen within seconds of the final

some who were new to the game. In the event, we had children aged board being completed, and detailed results, including the hands,

from 5 to 18, the full range. Our concerns over differing ages proved are visible on the Internet at www.bridgewebs.com/banbury/ the

to be a non-issue and they all sat and played in the same group. A following morning.

The second week we were nervous as to how many would return.

Most returned and several new ones appeared! We start sessions STOP PRESS

with ‘bridge aerobics’ where I shout out questions and they shout

the answers back. This goes down well and gets them in the mood. CONGRATULATIONS TO the following clubs:

By the third week, we had them playing a competitive game of

Minibridge where the boards moved and the kids filled in the

travellers. The fourth week we started moving people and boards,

• Wootton Bassett Bridge Club in Wiltshire, who have re-

affiliated to the EBU: www.bridgewebs.com/woottonbassett/

and introduced the concept of vulnerability so we could score the

game on the computer and have their names up in lights. The fifth

scores. They took to these more quickly than our regular members 1151223. Visit www.bridgewebs.com/kendal/

did and they love seeing their names up on the TV screens.

how to get more kids. This we plan to do over the next few

• Little Clacton Bridge Club in Essex, who opened recently at

the Little Clacton Youth and Community Hall. They are

months. It is early days yet, but it is exhilarating to see 5-year-olds affiliated to Suffolk CBA, and meet on Thursdays at 2pm.

playing against an 18-year-old and his granny! (Frank Deakin) Full info at www.bridgewebs.com/littleclacton/