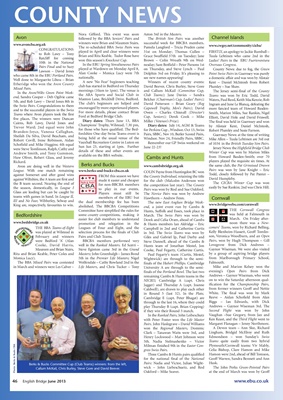 Nora Gifford. This event was soon Aston 3rd in the Masters.

played in April and clear winners were 31st on Monday; Thomas Cullen – FIRSTLY, an apology to Jackie Rumball –

Brian and Rita Keable. Tudor Rose have Grace Swaffield 37th on Tuesday; Jane Tuula Lehtinen who came 2nd in the

10th in the National

Pairs Final and to Suzy

played at Wardown on Monday April 8, on Thursday, and Steve Lynch – Paul County News: due to fog, the Green

who came 8th in the EBU Portland Pairs.

nationally. see new names appearing! a domestic affair and was won by Alistair

Etheridge who won the Avon County

mornings (10am to 1pm). The venue is and Callum McKail (Committee Cup, The Jersey semi-final of the County

In the Avon/Wilts Green Point Week-

the Swiss Pairs. Congratulations to them

and to the successful players in the Swiss

five places. The winners were Duncan

for those who have qualified. The Bed- for Perkins Cup , Windsor. Oct 13, Swiss Robert Plumley and Susie Farnon.

being held at the usual venue of the Windsor. Nov 24, Friendly Pairs, SBBC. Mike Allen – Tuula Lehtinen are 3rd out

Vauxhall Recreation Centre in Luton on Remember our GP Swiss weekend on of 1034 in the British Tuesday Sim Pairs.

were Steve Tomlinson, Ralph, Cathy and

available on the BBA website. from Howard Basden-Smith; over 70

Avon are doing well in the Western Berks and Bucks www.cambsbridge.org.uk the same club, the Pat Grinstead Drawn

League. With one match remaining www.berks-and-bucks-cba.co.uk Pairs was won by Jane Knight – Eric

COLIN Payne from Huntingdon BC won

against Somerset and after good wins FROM this season we have Todd, closely followed by Pat Panter –

the County Individual, retaining the title

against Wiltshire, the A team are first and made it easier and cheaper David Humpleby.

for the club (Malcolm Anderson won

the B team second. Nearing the end of for non-BBCBA members The CICBA Winter Cup was won

the competition last year). The County

the season, domestically, in League I to play in our events. easily by Sue Rankin; 2nd was Chris Hill.

Pairs was won by Rod and Sue Oakford.

teams with games in hand. In League II, members of the EBU but

III and No Fear, Wibberley, Selway and

Committee have simplified the rules for Hunts, Suffolk and Essex, took place in THE Cornwall Congress

Bedfordshire some county competitions, making it March. The Swiss Pairs was won by was held at Falmouth in

easier for club members to understand Derek and Celia Oram, ahead of Cambs March. On Friday after-

www.bedsbridge.co.uk promotion and relegation in the & Hunts members Ian Aldridge – Eric noon there was a New-

THE BBA Teams-of-Eight Leagues of Four and Eight, and the Campbell in 2nd and Catherine Curtis comers’ Teams, won by Richard Belling,

was played at Wilstead in selection process for the finals of Club in 3rd. The Swiss Teams was won by Kelly Blenheim-Hassett, Geoff Tomlin-

February and winners Pairs and Club Teams. Giles and Gabriel Ip, Paul Darby and son, Veronica Woodburn, and an Open

were Bedford ‘A’ (Alan BBCBA members performed very Steve Dannell, ahead of the Cambs & Pairs, won by Hugh Thompson – Gill

Monica Lucy). 5th in the Premier Life Masters; Nigel Wightwick) are through to the semi- from Marlborough Primary School,

The BBA Mixed Pairs was contested Wolfendale – Cathy Rowland 2nd in the finals of the Hubert Phillips. Cambridge Falmouth.

in March and winners were Les Calver – Life Masters, and Chris Tucker – Tony University A are through to the semi- Mike and Marion Kelsey won the

finals of the Portland Bowl. The last two evening’s Open Pairs from Dick

NICKO, Cambridge A (capt. Chris on to win the Saturday afternoon qual-

Jagger) and Thursday A (capt. Joanne ification for the Championship Pairs,

Caldwell), are drawn to play each other from former winners Geoff and Nettie

through to the last 16, where they could Biggs – Ian Edwards, with Dick

if they win their Round 3 match. Second Flight was won by John

In the Ranked Pairs, John Leibeschutz Vaughan –Sue Gregory, from Jan and

with Peter Foster won the Life Master Ken Keast, and the Third Flight went to

for the national final of the National Geoff Warren, Sandra Bennett and Ann

Oakford – Mike Seaver. at the end of March was won by Geoff