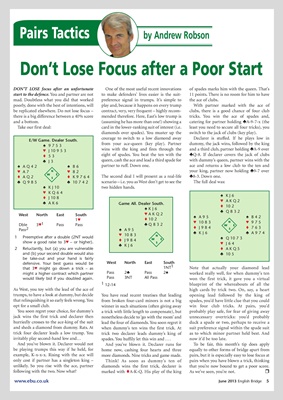 DON’T LOSE focus after an unfortunate One of the most useful recent innovations of spades marks him with the queen. That’s

start to the defence. You and partner are not to make defenders’ lives easier is the suit- 11 points. There is no room for him to have

mad. Doubtless what you did that worked preference signal in trumps. It’s simple to the ace of clubs.

poorly, done with the best of intentions, will play and, because it happens on every trump With partner marked with the ace of

be replicated elsewhere. Do not lose focus – contract, very, very frequent – highly recom- clubs, there is a good chance of four club

there is a big difference between a 40% score mended therefore. Here, East’s low trump is tricks. You win the ace of spades and,

and a bottom. (assuming he has more than one!) showing a catering for partner holding ®A-9-7-x (the

Take our first deal: card in the lower-ranking suit of interest (i.e. least you need to secure all four tricks), you

diamonds over spades). You muster up the switch to the jack of clubs (key play).

courage to switch to a low diamond away Declarer is stuffed. If he plays low in

´ 9753 from your ace-queen (key play). Partner dummy, the jack wins, followed by the king

t 53 eight of spades. You beat the ten with the ®Q-8. If declarer covers the jack of clubs

® J3 queen, cash the ace and lead a third spade for with dummy’s queen, partner wins with the

2 Reluctantly, but (a) you are vulnerable t AKQ5

be take-out and your hand is fairly

defensive. Your best guess would be West North East South

might a higher contract which partner Pass 2® Pass 2´ worked really well, for when dummy’s ten

would likely bid if you doubled again. Pass 3NT All Pass won the first trick, it gave you a virtual

1 12-14 blueprint of the whereabouts of all the

As West, you toy with the lead of the ace of high cards by trick two. On, say, a heart

trumps, to have a look at dummy, but decide You have read recent treatises that leading opening lead followed by the king of

that relinquishing it so early feels wrong. You from broken four-card minors is not a big spades, you’d have little clue that you could

opt for a small club. winner in such situations (often giving away win four club tricks. At pairs, you’d

You soon regret your choice, for dummy’s a trick with little length to compensate), but probably play safe, for fear of giving away

jack wins the first trick and declarer then nonetheless decide to ‘go with the room’ and unnecessary overtricks: you’d probably

hurriedly crosses to the ace-king of the suit lead the four of diamonds. You soon regret it duck a spade or two, perhaps to receive a

and sheds a diamond from dummy. Rats. At when dummy’s ten wins the first trick. At suit preference signal within the spade suit

irritably play second-hand low and… spades. You huffily let this win and . . . now it’d be too late.

be playing trumps this way if he held, for home now, cashing four hearts and three equally to other forms of bridge apart from

example, K-x-x-x. Rising with the ace will more diamonds. Nine tricks and game made. pairs, but it is especially easy to lose focus at

only cost if partner has a singleton king – Think! As soon as dummy’s ten of pairs when you have blown a trick, thinking

unlikely. So you rise with the ace, partner diamonds wins the first trick, declarer is that you’re now bound to get a poor score.

following with the two. Now what? marked with tA-K-Q. His play of the king As we’ve seen, you’re not. r