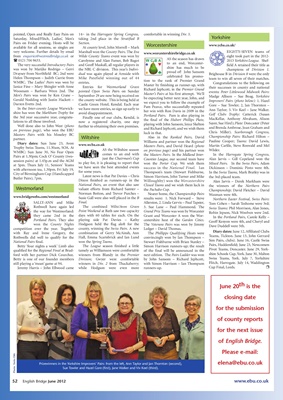 pointed, Open and Really Easy Pairs on 14= in the Harrogate Spring Congress, comfortable in winning Div. 3.

Pairs on Friday evening. Hosts will be Section.

available for all sessions, so singles are At county level, John Morrell – Mark Worcestershire www.ycba.co.uk/

from enquiries@westmidbridge.co.uk or Wilde County Teams event was won by eight took part in the 2012-

The very successful Introductory Pairs and Geoff Maskall, all regular players in to an end, Worcester- field A retained their title as

was won by Marijke Rodrigo – Gerri the NBL C division. This year’s Indivi- shire has much to be

Draysey from Northfield BC; 2nd were dual was again played at Arnside with proud of! John Sansom

Brighouse B in Division 8 were the only

team to win all seven of their matches.

WMBC. The Ladies’ Pairs was won by entries. tion to the rank of Premier Grand

Congratulations to the following on

Janice Fine – Mary Shingler with Anne Entries for Westmorland Green Master by finishing as runner-up, with

their successes in county and national

Gerald Nodding with Justin Hackett – be expecting better next year, John, and

the county website. This is being held at Improvers’ Pairs (photo below): 1. Hazel

Darren Evetts 2nd. we expect you to follow the example of

In the Inter-county League Warwick- Pam Pearce, who successfully repeated

we have more entries, so sign up early to Ann Taylor; 3. Viv Keel – Jane Walker.

Finally one of our clubs, Kendal, is MacKellar, Anthony Abraham, Alison

lations to all those involved. the final of the Hubert Phillips Plate,

further to obtaining their own premises. and Brenda Ambrose, Joan Graham and

on previous page), who won the EBU and Richard Jephcott, and we wish them

Masters Pairs with his Moseley BC

AS the Wiltshire season on previous page) and his partner won Wilder.

comes to an end with the Masters Pairs. In the Midland Inter- In the Harrogate Spring Congress,

to play for, it is pleasing to report that won the Porter Cup. We wish them Mixed Pairs. In the Swiss Pairs, Adam

we have seen the best attended events success in the National Final. Ian Dickinson – Dominic Pinto were 4th.

for some years. Thompson’s team (Stewart Fishburne, In the Swiss Teams, Mark Bratley was in

National Pairs, an event that also saw Closed Teams and we wish them luck in the winners of the Northern Pairs

they came 2nd in the days with 60 tables for each. On the Grant and Worcester A won the Wor- In the Portland Pairs, Carole Kelly –

Portland Pairs. They also playing side Pat Davies – Kathy cestershire heat of the Garden Cities. Geoff Kenyon were 4th, and Cheryl and

won the County Nights Hodgson held the flag aloft for the The Veterans Pairs was won by Jimmy Dave Duddell were 5th.

competition over the year. Together county, winning the Swiss Pairs. A new Ledger – David Thomas.

qualified for the Regional Final at Brad- tamely as Williamson were comfortable of the final will be announced in the Pivot Teams, Doncaster. June 29, York-

ford with her partner Dick Courchee. winners from Blandy in the Premier next edition. The Pairs Ladder was won shire Schools Cup, York. June 30, Malton

for the next issue

Prizewinners in the Yorkshire Improvers’ Pairs: from the left, Ann Taylor and Jan Thornton (second), elena@ebu.co.uk