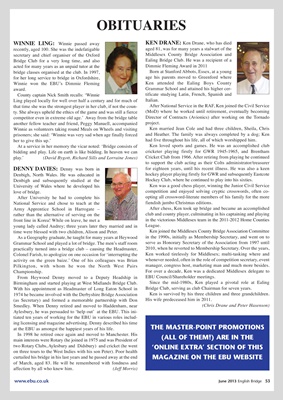 recently, aged 100. She was the indefatigable aged 81, was for many years a stalwart of the

Bridge Club for a very long time, and also Ealing Bridge Club. He was a recipient of a

bridge classes organised at the club. In 1997, Born at Stanford Abbots, Essex, at a young

for her long service to bridge in Oxfordshire, age his parents moved to Greenford where

Ling played locally for well over half a century and for much of Italian.

that time she was the strongest player in her club, if not the coun- After National Service in the RAF, Ken joined the Civil Service

ty. She always upheld the ethics of the game and was still a fierce (MoD) where he worked until retirement, eventually becoming

competitor even in extreme old age.’ Away from the bridge table Director of Contracts (Avionics) after working on the Tornado

Winnie as volunteers taking round Meals on Wheels and visiting Ken married Jean Cole and had three children, Sheila, Chris

prisoners; she said: ‘Winnie was very sad when age finally forced and Heather. The family was always completed by a dog; Ken

her to give this up.’ had five throughout his life, all of which worshipped him.

At a service in her memory the vicar noted: ‘Bridge consists of Ken loved sports and games. He was an accomplished club

bidding and play. Life on earth is like bidding. In heaven we can cricketer playing firstly for GWR 1945-1965, and Brentham

to support the club acting as their Colts administrator/treasurer

DENNY DAVIES: Denny was born in for eighteen years, until his recent illness. He was also a keen

Denbigh, North Wales. He was educated in hockey player playing firstly for GWR and subsequently Eastcote

Denbigh and subsequently studied at the Hockey Club, where he continued to play into his sixties.

University of Wales where he developed his Ken was a good chess player, winning the Junior Civil Service

National Service and chose to teach at the fiendish jumbo Christmas editions.

Army Apprentice School in Harrogate – After chess, Ken took up bridge and became an accomplished

rather than the alternative of serving on the club and county player, culminating in his captaining and playing

front line in Korea! While on leave, he met a in the victorious Middlesex team in the 2011-2012 Home Counties

As a Geography graduate, he taught for many years at Heywood in the 1990s, initially as Membership Secretary, and went on to

Grammar School and played a lot of bridge. The men’s staff room serve as Honorary Secretary of the Association from 1997 until

practically turned into a bridge club – causing the Headmaster, 2010, when he reverted to Membership Secretary. Over the years,

Colonel Farish, to apologize on one occasion for ‘interrupting the Ken worked tirelessly for Middlesex; multi-tasking where and

activity on the green baize.’ One of his colleagues was Brian whenever needed, often in the role of competition secretary, event

Pilkington, with whom he won the North West Pairs manager, congress host, marketing man and much more besides.

Championship. For over a decade, Ken was a dedicated Middlesex delegate to

From Heywood Denny moved to a Deputy Headship in EBU Council/Shareholder meetings.

Birmingham and started playing at West Midlands Bridge Club. Since the mid-1980s, Ken played a pivotal role at Ealing

With his appointment as Headmaster of Long Eaton School in Bridge Club, serving as club Chairman for seven years.

1974 he became involved with the Derbyshire Bridge Association Ken is survived by his three children and three grandchildren.

(as Secretary) and formed a memorable partnership with Don His wife predeceased him in 2011.

Smedley. When Denny retired and moved to Haddenham, near (Chris Drane and Peter Hasenson)

Aylesbury, he was persuaded to ‘help out’ at the EBU. This ini-

at the EBU as amongst the happiest years of his life. THE MASTER-POINT PROMOTIONS

In 1998 he retired once again and moved to Manchester. His

main interests were Rotary (he joined in 1975 and was President of (ALL OF THEM!) ARE IN THE

two Rotary Clubs, Aylesbury and Didsbury) and cricket (he went ‘ONLINE EXTRA’ SECTION OF THIS

on three tours to the West Indies with his son Peter). Poor health

of March, aged 83. He will be remembered with fondness and

affection by all who knew him. (Jeff Morris)