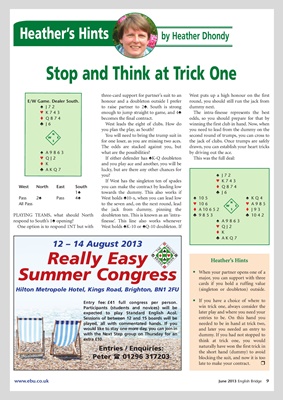 Stop and Think at Trick One

E/W Game. Dealer South. honour and a doubleton outside I prefer round, you should still run the jack from

™ K743 enough to jump straight to game, and 4´ The intra-finesse represents the best

t Q874 becomes the final contract. odds, so you should prepare for that by

® J6 West leads the eight of clubs. How do winning the first club in hand. Now, when

you plan the play, as South? you need to lead from the dummy on the

You will need to bring the trump suit in second round of trumps, you can cross to

S for one loser, as you are missing two aces. the jack of clubs. Once trumps are safely

The odds are stacked against you, but drawn, you can establish your heart tricks

´ A9863 what are the possibilities? by driving out the ace.

™ QJ2 If either defender has ´K-Q doubleton This was the full deal:

t K and you play ace and another, you will be

® AKQ7 lucky, but are there any other chances for

If West has the singleton ten of spades ™ K743

respond to South’s 1´ opening? finesse’. This line also works whenever ´ A9863

Summer Congress • When your partner opens one of a

major, you can support with three

cards if you hold a ruffing value

Entry fee: £41 full congress per person. • If you have a choice of where to

Participants (students and novices) will be win trick one, always consider the

expected to play Standard English Acol. later play and where you need your

Sessions of between 12 and 15 boards will be entries to be. On this hand you

played, all with commentated hands. If you needed to be in hand at trick two,

would like to stay one more day, you can join in and later you needed an entry to

with the Next Step group on Thursday for an dummy. If you had not stopped to

extra £10. think at trick one, you would

naturally have won the first trick in

late to make your contract. r