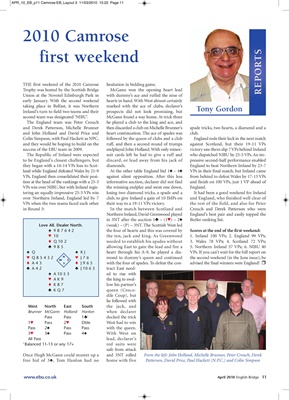 THE first weekend of the 2010 Camrose hesitation in bidding game.

early January. With the second weekend hearts in hand. With West almost certainly

taking place in Belfast, it was Northern marked with the ace of clubs, declarer’s

Ireland’s turn to field two teams and their prospects did not look promising, but Tony Gordon

The England team was Peter Crouch he played a club to the king and ace, and

and John Holland and David Price and heart continuation. The ace of spades was club.

Colin Simpson, with Paul Hackett as NPC, followed by the queen of clubs and a club England rode their luck in the next match

and they would be hoping to build on the ruff, and then a second round of trumps against Scotland, but their 19-11 VPs

success of the EBU team in 2009. endplayed John Holland. With only minor- victory saw them slip 7 VPs behind Ireland

The Republic of Ireland were expected suit cards left he had to give a ruff and who dispatched NIBU by 25-5 VPs. An im-

to be England’s closest challengers, but discard, or lead away from his jack of pressive second-half performance enabled

they began with a 16-14 VPs loss to Scot- diamonds. England to beat Northern Ireland by 23-7

land while England defeated Wales by 21-9 At the other table England bid 1´ – 4´ VPs in their final match, but Ireland came

VPs. England then consolidated their posi- against silent opposition. After this less from behind to defeat Wales by 17-13 VPs

tion at the head of the rankings with a 25-3 informative auction, declarer did not find and finish on 100 VPs, just 1 VP ahead of

VPs win over NIBU, but with Ireland regis- the winning endplay and went one down, England.

tering an equally impressive 25-5 VPs win losing two diamond tricks, a spade and a It had been a good weekend for Ireland

over Northern Ireland, England led by 7 club, to give Ireland a gain of 10 IMPs on and England, who finished well clear of

VPs when the two teams faced each other their way to a 19-11 VPs victory. the rest of the field, and also for Peter

in Round 3: In the match between Scotland and Crouch and Derek Patterson who were

´ 987642 the four of hearts and this was covered by Scores at the end of the first weekend:

t A43 S t J965 with the four of spades. To defeat the con- advised the final winners were England! r

Pass 2´ Pass Pass with the queen.

Once Hugh McGann could muster up a and 3NT rolled From the left: John Holland, Michelle Brunner, Peter Crouch, Derek