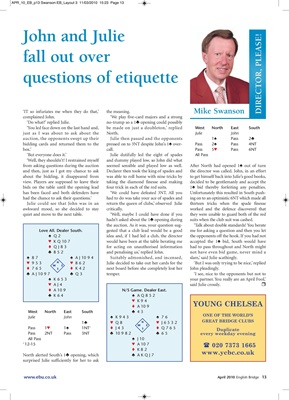 ‘IT so infuriates me when they do that,’ the meaning. Mike Swanson

complained John. ‘We play five-card majors and a strong

‘Do what?’ replied Julie. no-trump so a 1® opening could possibly

‘You led face down on the last hand and, be made on just a doubleton,’ replied West North East South

just as I was about to ask about the North. Julie John

‘But everyone does it.’ Julie dutifully led the eight of spades All Pass

‘Well, they shouldn’t! I restrained myself and dummy played low, so John did what

from asking questions during the auction seemed sensible and played low as well. After North had opened 1´ out of turn

and then, just as I got my chance to ask Declarer then took the king of spades and the director was called. John, in an effort

about the bidding, it disappeared from was able to roll home with nine tricks by to get himself back into Julie’s good books,

view. Players are supposed to leave their taking the diamond finesse and making decided to be gentlemanly and accept the

bids on the table until the opening lead four trick in each of the red suits. 1´ bid thereby forfeiting any penalties.

has been faced and both defenders have ‘We could have defeated 3NT. All you Unfortunately this resulted in South push-

had the chance to ask their questions.’ had to do was take your ace of spades and ing on to an optimistic 6NT which made all

Julie could see that John was in an return the queen of clubs,’ observed Julie thirteen tricks when the spade finesse

awkward mood, so she decided to stay critically. worked and the defence discovered that

quiet and move to the next table. ‘Well, maybe I could have done if you they were unable to guard both of the red

hadn’t asked about the 1® opening during suits when the club suit was cashed.

the auction. As it was, your question sug- ‘Talk about double standards! You berate

Love All. Dealer South. gested that a club lead would be a good me for asking a question and then you let

´ Q2 idea and, if I had led a club, the director the opponents off the hook. If you had not

™ K Q 10 7 would have been at the table berating me accepted the 1´ bid, South would have

® 852 and penalising us,’ replied John. not have even bid game, never mind a

t 765 S t K42 next board before she completely lost her John pleadingly.

surprised Julie sufficiently for her to ask