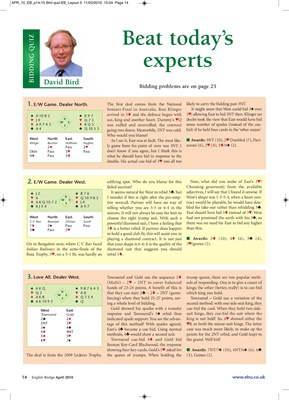 1. E/W Game. Dealer North. The first deal comes from the National likely to carry the bidding past 3NT.

Seniors Final in Australia. Ron Klinger It might seem that West could bid 3´ over

™ Q73 ace, king and another heart. Dummy’s ™Q doubt took the view that East would have bid

t A9743 S t KQ5 was ruffed and overruffed, the contract some number of spades (instead of the cue-

Who would you blame?

As I see it, East was at fault. The most like-

Dble Pass 3™ Pass don’t know if you agree, but I think this is

double. His actual cue-bid of 3™ was all too

minors. It will not always be easy for him to East should have bid 3t instead of 3™. West

West North East South choose the right trump suit. With such a had not promised the earth with his 3®, so

powerful diamond suit, I have a feeling that there was no need for East to bid any higher

to hold a good club fit, this will assist you in

3. Love All. Dealer West. Townsend and Gold use the sequence 2t trump queen, there are two popular meth-

ing a whole level of bidding. second method: with one side-suit king, they

Gold showed his spades with a transfer cue-bid the card. When they hold two side-

Townsend Gold response and Townsend’s 3´ rebid then suit kings, they cue-bid the suit where the

2® 2t indicated spade support. You see the advan- king is not held! So, 6™ showed either the

2NT 3™ tage of this method? With spades agreed, ™K or both the minor-suit kings. The latter

5t 5™ methods, 4® would show a second suit. points for the 2NT rebid, and Gold leapt to