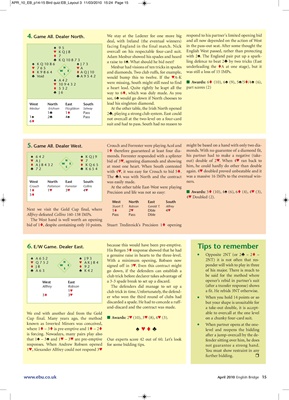 4. Game All. Dealer North. We stay at the Lederer for one more big respond to his partner's limited opening bid

deal, with Ireland (the eventual winners) and all now depended on the action of West

´ 95 facing England in the final match. Nick in the pass-out seat. After some thought the

™ KQJ8 overcall on his respectable four-card suit. English West passed, rather than protecting

t 7 Adam Mesbur showed his spades and heard with 2´. The England pair put up a spark-

™ 765 N ™A Mesbur had visions of ten tricks in spades underleading the tA at one stage), but it

see, 6´ would go down if North chooses to

Mesbur Erichsen Fitzgibbon Selway At the other table, the Irish North opened

not overcall at the two-level on a four-card

suit and had to pass. South had no reason to

5. Game All. Dealer West. Crouch and Forrester were playing Acol and might be based on a hand with only two dia-

1t therefore guaranteed at least four dia- monds. With no guarantee of a diamond fit,

´ 642 ´ KQJ9 monds. Forrester responded with a splinter his partner had to make a negative (take-

t KQ65 at most one heart. When South contested him, he could hardly do other than double

with 4™, it was easy for Crouch to bid 5t. again. 4™ doubled proved unbeatable and it

Precision and life was not so easy:

The West hand is well worth an opening

because this would have been pre-emptive.

His Bergen 3t response showed that he had

2NT) it is not often that res-

With a minimum opening, Robson now

t 92 signed off in 3™. Even this contract might ponder will wish to play in three

West East a 3-3 spade break to set up a discard. opener’s rebid in partner’s suit

1™ club trick in time. Unfortunately, the defend- a fit. He rebids 3NT otherwise.

er who won the third round of clubs had

discarded a spade. He had to concede a ruff-

but your shape is unsuitable for

and-discard and the contract was made. a take-out double, it is accept-

known as Inverted Minors was conceived,

• When partner opens at the one-

level and reopens the bidding

is forcing. Nowadays, many pairs play also after a jump-overcall by the de-

responses. When Andrew Robson opened for some bidding tips. not guarantee a strong hand.

1™, Alexander Allfrey could not respond 3™ You must show restraint in any