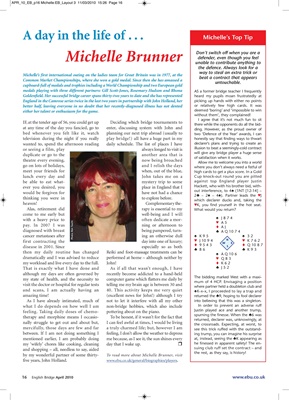 Michelle Brunner Don’t switch off when you are a

defender, even though you feel

unable to contribute anything to

the defence. Always look for a

Michelle’s first international outing on the ladies team for Great Britain was in 1977, at the

way to steal an extra trick or

beat a contract that appears

Common Market Championships, where she won a gold medal. Since then she has amassed a

Goldenfield. Her successful bridge career spans thirty-two years to date and she has represented heard my pupils moan frustratedly at

England in the Camrose series twice in the last two years in partnership with John Holland, her picking up hands with either no points

better half, leaving everyone in no doubt that her recently-diagnosed illness has not dented or relatively few high cards. It was

either her talent or enthusiasm for the game. deemed ‘boring’ and ‘impossible to win

without them’, they complained!

I agree that it’s not much fun to sit

IF, at the tender age of 56, you could get up Deciding which bridge tournaments to there while the opponents do all the bid-

at any time of the day you fancied, go to enter, discussing system with John and ding. However, as the proud owner of

bed whenever you felt like it, watch planning our next trip abroad (usually to two ‘Defence of the Year’ awards, I can

television during the night if you really play bridge!) all have a huge part in my honestly say that finding ways to thwart

wanted to, spend the afternoon reading daily schedule. The list of places I have declarer’s plans and trying to create an

or seeing a film, play always longed to visit is illusion to beat a seemingly-cold contract

will give any bridge player a huge sense

duplicate or go to the an other area that is

of satisfaction when it works.

theatre every evening, now being broached Allow me to welcome you into a world

go on lots of holidays, and I relish the days where you don’t always need a fistful of

meet your friends for when, out of the blue, high cards to get a plus score. In a Gold

ever you desired, you place in England that I Hackett, who with his brother bid, with-

would be forgiven for have not had a chance

thinking you were in to explore before. which declarer ducks and, taking the

heaven! Complementary the- ™K, you find yourself in the hot seat.

Alas, retirement did rapy is essential to my What would you return?

come to me early but well-being and I will

with a heavy price to often dedicate a mor- ´ J874

first contracting the day into one of luxury; W E

my workload and live every day to the full. John! t K62

That is exactly what I have done and As if all that wasn’t enough, I have ® J52

The bidding marked West with a maxi-

my state of health, and the necessity to computer game which flatters me daily by

mum of 4 HCP. Envisaging a position

and scans, I am actually having an 40. This activity keeps me very quiet ´K-x-x, I proceeded to lay a trap and

amazing time! (excellent news for John!) although I try returned the ®9, hoping to fool declarer

As I have already intimated, much of not to let it interfere with all my other into believing that this was a singleton.

what I do depends on how well I am non-bridge hobbies, which also include In order to prevent an adverse ruff

feel ing. Taking daily doses of chemo - pottering about on the piano. Justin played ace and another trump,

spurning the finesse. When the ®6 was

therapy and morphine means I occasio- To be honest, if it wasn’t for the fact that

returned, declarer was, unknowingly, at

nally struggle to get out and about but, I can feel awful at times, I would be living the crossroads. Expecting, at worst, to

mercifully, those days are few and far a truly charmed life; but, however I am see this trick ruffed with the outstand-

between. If I am not doing something I feeling, I don’t allow the weather to depress ing trump, you can imagine his surprise

mentioned earlier, I am probably doing me because, as I see it, the sun shines every at, instead, seeing the ®K appearing as

my ‘wifely’ chores like cooking, cleaning day that I wake up. r he finessed in apparent safety! The en-

and shopping – all, needless to say, aided suing club ruff set the contract – and

the rest, as they say, is history!

by my wonderful partner of some thirty- To read more about Michelle Brunner, visit