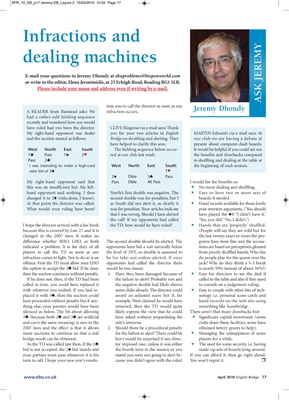 tion was to call the director as soon as any

A READER from Banstead asks: We infraction occurs. Jeremy Dhondy

had a rather odd bidding sequence

recently and wondered how you would

have ruled had you been the director. CLIVE Ringrose via e-mail says: Thank

My right-hand opponent was dealer you for your two articles in English MARTIN Edwards via e-mail says: At

and the auction started as follows: Bridge on doubling and alerting. They our club we are having a debate at

have helped to clarify this area. present about computer-dealt boards.

1® Pass 1´ 2™ red at our club last week: the benefits and drawbacks compared

Pass 2®1 to shuffling and dealing at the table at

I was intending to make a high-card West North East South the beginning of each session.

My right-hand opponent said that Pass Dble All Pass I would list the benefits as:

this was an insufficient bid. My left- • No more dealing and shuffling.

hand opponent said nothing. I then

North’s first double was negative. The

second double was for penalties, but I

• Easy to have two or more sets of

At that point the director was called.

What would your ruling have been?

as South did not alert it, as clearly it

was for penalties. Your articles indicate

• Hand records available for those lovely

post-mortem arguments. (‘You should

that I was wrong. Should I have alerted have played the ´9.’ ‘I didn’t have it.’

I hope the director arrived with a law book

because this is covered by Law 27 and it is

the TD, how would he have ruled? • Hands that are ‘properly’ shuffled.

(People will say they are wild but for

changed in the 2007 laws. It makes no the last twenty years or more the pro-

difference whether RHO, LHO, or both The second double should be alerted. The grams have been fine and the accusa-

indicated a problem. It is the duty of all opponents have bid a suit naturally below tions are based on perceptions gleaned

players to call the TD as soon as any the level of 3NT, so double is assumed to from poorly shuffled hands. Why else

infraction comes to light. Not to do so is an be for take-out unless alerted. If your do people play for the queen over the

offence. First the TD must allow your LHO opponents had called the director there jack? Why do they think a 3-3 break

then the auction continues without penalty.

If he does not, then, if the TD had been

1. Have they been damaged because of

the failure to alert? Probably not and

• Easy for directors to see the deal if

called to the table and also if they need

called in time, you could have replaced it the negative double had likely shown to consult on a judgement ruling.

with whatever you wished. If you had re-

placed it with 3®, then the auction could

some clubs already. The director could

award an adjusted score but if, for

• Easy to couple with other bits of tech-

have proceeded without penalty but if any- example, West claimed he would have hand records on the web site using

thing else, your partner would have been removed, then the TD would quite something like Scorebridge.

silenced as below. The bit about allowing likely express the view that he could There aren’t that many drawbacks but:

and carry the same meaning) is new to the

have asked without jeopardising his

2007 laws and the effect is that it allows 2. Should there be a procedural penalty obtained lottery grants to help).

more auctions to continue so that a real

bridge result can be obtained.

for the failure to alert? There could be

but I would be surprised if any direc-

• Managing the unhappiness of some

players for a while.

As the TD was called late then, if the 2®

bid is not accepted, the 2´ bid stands and

tor imposed one, unless it was either

the fourth time in the session or you

• The need for some security, i.e. having

made-up sets of boards lying around.

your partner must pass whenever it is his stated you were not going to alert be- If you can afford it, then go right ahead.

turn to call. I hope your new year’s resolu- cause you didn’t agree with the rules! You won’t regret it. r