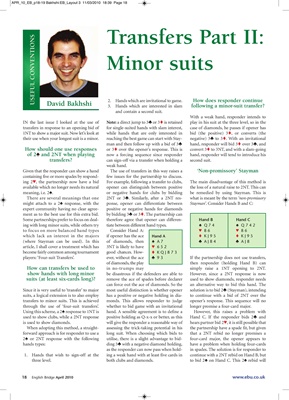 2. Hands which are invitational to game. How does responder continue

David Bakhshi 3. Hands which are interested in slam following a minor-suit transfer?

and contain a second suit.

With a weak hand, responder intends to

IN the last issue I looked at the use of Note: a direct jump to 3® or 3t is retained play in his suit at the three level, so in the

transfers in response to an opening bid of for single-suited hands with slam interest, case of diamonds, he passes if opener has

1NT to show a major suit. Now let’s look at while hands that are only interested in bid (the positive) 3t, or converts (the

their use when your longest suit is a minor. reaching the best game can start with Stay- negative) 3® to 3t. With an invitational

man and then follow up with a bid of 3® hand, responder will bid 3t over 3®, and

How should one use responses or 3t over the opener’s response. This is convert 3t to 3NT, and with a slam-going

of 2´ and 2NT when playing now a forcing sequence since responder hand, responder will tend to introduce his

transfers? can sign-off via a transfer when holding a second suit.

containing five or more spades by respond- few issues for the partnership to discuss.

ing 2™, the partnership now have a bid For example, following a transfer to clubs, The main disadvantage of this method is

available which no longer needs its natural opener can distinguish between positive the loss of a natural raise to 2NT. This can

meaning, i.e. 2´. or negative hands for clubs by bidding be remedied by using Stayman. This is

There are several meanings that one 2NT or 3®. Similarly, after a 2NT res- what is meant by the term ‘non-promissory

might attach to a 2´ response, with the ponse, opener can differentiate between Stayman’. Consider Hands B and C:

ment as to the best use for this extra bid. by bidding 3® or 3t. The partnership can

article, I shall cover a treatment which has 3NT is likely to have ™ 652

players: ‘Four-suit Transfers’. ever, without the ace ® 93 If the partnership does not use transfers,

of diamonds, the play then responder (holding Hand B) can

How can transfers be used to in no-trumps may simply raise a 1NT opening to 2NT.

show hands with long minor be disastrous if the defenders are able to However, since a 2NT response is now

can force out the ace of diamonds. So the an alternative way to bid this hand. The

Since it is very useful to ‘transfer’ to major most useful distinction is whether opener solution is to bid 2® (Stayman), intending

suits, a logical extension is to also employ has a positive or negative holding in dia- to continue with a bid of 2NT over the

transfers to minor suits. This is achieved monds. This allows responder to judge opener’s response. This sequence will no

through the use of ‘four-suit transfers’. whether to bid game with an invitational longer promise a four-card major.

Using this scheme, a 2´ response to 1NT is hand. A sensible agreement is to define a However, this raises a problem with

used to show clubs, while a 2NT response positive holding as Q-x-x or better, as this Hand C. If the responder bids 2® and

is used to show diamonds. will give the responder a reasonable way of hears partner bid 2™, it is still possible that

When adopting this method, a straight- assessing the trick-taking potential in his the partnership have a spade fit, but given

forward approach is for responder to use a long suit. When choosing which bids to that a 2NT rebid no longer promises a

2´ or 2NT response with the following utilise, there is a slight advantage to bid- four-card major, the opener appears to

hands types: ding 3® with a negative diamond holding, have a problem when holding four-cards

as the responder can now pass when hold- in spades. The solution is for responder to

1. Hands that wish to sign-off at the ing a weak hand with at least five cards in continue with a 2NT rebid on Hand B, but

three level. both clubs and diamonds. to bid 2´ on Hand C. This 2´ rebid will