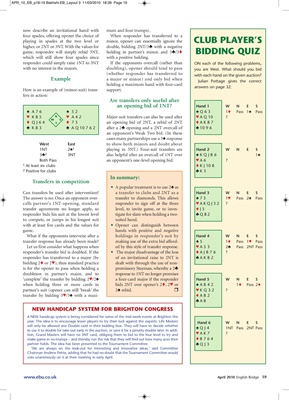 now describe an invitational hand with mum and four trumps).

four spades, offering opener the choice of When responder has transferred to a

playing in spades at the two level or minor, opener can essentially ignore the CLUB PLAYER’S

higher, or 2NT or 3NT. With the values for double, bidding 2NT/3® with a negative

which will still show four spades since with a positive holding.

responder could simply raise 1NT to 3NT If the opponents overcall (rather than ON each of the following problems,

with no interest in the majors. doubling), opener should tend to pass you are West. What should you bid

(whether responder has transferred to with each hand on the given auction?

holding a maximum hand with four-card

Here is an example of (minor-suit) trans- support.

Are transfers only useful after

an opponent’s Weak Two bid. (In these

cases many partnerships use a 3´ response

West East to show both minors and doubt about

Both Pass an opponent’s one-level opening bid. ™A6 ?

• A popular treatment is to use 2´ as

Can transfers be used after intervention? a transfer to clubs and 2NT as a Hand 3 W N E S

The answer is no. Once an opponent over- transfer to diamonds. This allows ´73 1™ Pass 2´ Pass

calls partner’s 1NT opening, standard responder to sign off at the three ™AKQJ32 ?

transfer agreements no longer apply, so level, to invite game, or to inves- tJ5

to compete, or jumps in his longest suit suited hand.

game. hands with positive and negative

transfer response has already been made? making use of the extra bid afford- ´5 1t Pass 1™ Pass

Let us first consider what happens when ed by this style of transfer response. ™A53 2® Pass 2NT Pass

responder’s transfer bid is doubled. If the • The major disadvantage of the loss tAJ876 ?

bidding 2t or 2™), then standard practice dealt with through the use of non-

is for the opener to pass when holding a promissory Stayman, whereby a 2®

doubleton in partner’s major, and to response to 1NT no longer promises

year. The idea is to encourage lesser players to try their luck against the experts. Life Masters Hand 6 W N E S

will only be allowed one Double card in their bidding box. They will have to decide whether

to use it to double for take-out early in the auction, or save it for a penalty double later. In addi-

tion, Grand Masters will have no 3NT card, obliging them to bid to the four level to try and ™AK7 ?

partner holds. The idea has been presented to the Tournament Committee. ®Q J 3

‘We are always on the look-out for interesting and innovative ideas,’ said Committee

Chairman Andrew Petrie, adding that he had no doubt that the Tournament Committee would

vote unanimously on it at their meeting in early April.