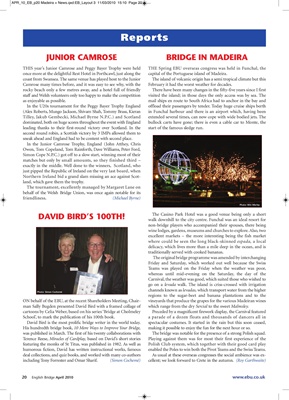 THIS year’s Junior Camrose and Peggy Bayer Trophy were held THE Spring EBU overseas congress was held in Funchal, the

once more at the delightful Rest Hotel in Porthcawl, just along the capital of the Portuguese island of Madeira.

coast from Swansea. The same venue has played host to the Junior The island of volcanic origin has a semi tropical climate but this

Camrose many times before, and it was easy to see why, with the February it had the worst weather for decades.

rocky beach only a few metres away, and a hotel full of friendly There have been many changes in the fifty-five years since I first

staff and Welsh volunteers only too happy to make the competition visited the island; in those days the only access was by sea. The

as enjoyable as possible. mail ships en route to South Africa had to anchor in the bay and

In the U20s tournament for the Peggy Bayer Trophy England offload their passengers by tender. Today huge cruise ships berth

(Alex Roberts, Mungo Jackson, Shivam Shah, Tommy Brass, Kieran in Funchal harbour and there is an airport which, having been

dominated, both on huge scores throughout the event with England bullock carts have gone; there is even a cable car to Monte, the

leading thanks to their first-round victory over Scotland. In the start of the famous sledge run.

second round robin, a Scottish victory by 3 IMPs allowed them to

sneak ahead and England had to be content with second place.

Simon Cope N.P.C.) got off to a slow start, winning most of their

matches but only by small amounts, so they finished third –

exactly in the middle. Well done to the winners, Scotland, who

just pipped the Republic of Ireland on the very last board, when

land, which gave them the trophy.

The tournament, excellently managed by Margaret Lane on

behalf of the Welsh Bridge Union, was once again notable for its

DAVID BIRD’S 100TH! walk downhill to the city centre. Funchal was an ideal resort for

non-bridge players who accompanied their spouses, there being

excellent markets – the more interesting being the fish market

where could be seen the long black-skinned espada, a local

delicacy, which lives more than a mile deep in the ocean, and is

The original bridge programme was amended by interchanging

Friday and Saturday, which worked out well because the Swiss

Teams was played on the Friday when the weather was poor,

whereas until mid-evening on the Saturday, the day of the

Carnival, the weather was good, which suited those who wished to

go on a levada walk. The island is criss-crossed with irrigation

channels known as levadas, which transport water from the higher

regions to the sugar-beet and banana plantations and to the

ON behalf of the EBU, at the recent Shareholders Meeting, Chair- vineyards that produce the grapes for the various Madeiran wines

man Sally Bugden presented David Bird with a framed collage of which range from the dry Sercial to the sweet Malmsley.

cartoons by Celia Weber, based on his series ‘Bridge at Cholmeley Preceded by a magnificent firework display, the Carnival featured

School’, to mark the publication of his 100th book. a parade of a dozen floats and thousands of dan cers all in

David Bird is the most prolific bridge writer in the world today. spectacular costumes. It started in the rain but this soon ceased,

His hundredth bridge book, 10 More Ways to Improve Your Bridge, making it possible to enjoy the fun for the next hour or so.

was published in March. The first of his twenty collaborations with The bridge was notable for the presence of a strong Polish squad.

Terence Reese, Miracles of Cardplay, based on David’s short stories Playing against them was for most their first experience of the

featuring the monks of St Titus, was published in 1982. As well as Polish Club system, which together with their good card play

humorous fiction, David has written instructional works, famous enabled the Poles to win both the Pivot Teams and the Swiss Teams.

deal collections, and quiz books, and worked with many co-authors As usual at these overseas congresses the social ambience was ex-

including Tony Forrester and Omar Sharif. (Simon Cochemé) cellent; we look forward to Crete in the autumn. (Roy Garthwaite)