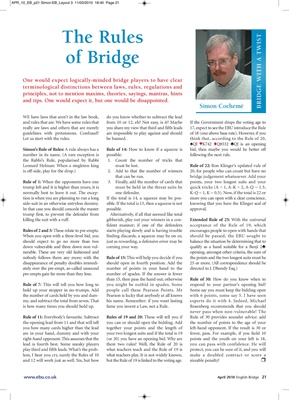 One would expect logically-minded bridge players to have clear

and tips. One would expect it, but one would be disappointed.

WE have laws that aren’t in the law book, do you know whether to subtract the lead

and rules that are. We have some rules that from 10 or 12, eh? Not easy, is it? Maybe If the Government drops the voting age to

really are laws and others that are merely you share my view that third and fifth leads 17, expect to see the EBU introduce the Rule

guidelines with pretensions. Confused? are impossible to play against and should of 18 (one above base rate). However, if you

Let us start with the rules. be banned. think that, according to the Rule of 20,

Simon’s Rule of Rules: A rule always has a Rule of 14: How to know if a squeeze is bid, then maybe you would be better off

number in its name. (A rare exception is possible: following the next rule.

the Rabbi’s Rule, popularised by Rabbi 1. Count the number of tricks that

Leonard Helman: When a singleton king must be lost. Rule of 22: Ron Klinger’s updated rule of

is off-side, play for the drop.) 2. Add to that the number of winners 20, for people who can count but have no

that can be run. bridge judgement whatsoever. Add your

Rule of 1: When the opponents have one 3. Finally, add the number of cards that points, your two longest suits and your

tion is when you are planning to run a long If the total is 14, a squeeze may be pos- more you can open with a clear conscience,

side-suit in an otherwise entryless dummy. sible. If the total is 13, then a squeeze is not knowing that you have the Klinger seal of

In that case you should concede the master possible. approval.

trump first, to prevent the defender from Alternatively, if all that seemed like total

killing the suit with a ruff. gibberish, play out your winners in a con- Extended Rule of 25: With the universal

fident manner; if one of the defenders acceptance of the Rule of 19, which

Rules of 2 and 3: These relate to pre-empts. starts playing slowly and is having trouble encourages people to open with hands that

When you open with a three-level bid, you finding discards, a squeeze may be on or, should be passed, the EBU sought to

should expect to go no more than two just as rewarding, a defensive error may be balance the situation by determining that to

down vulnerable and three down non vul- coming your way. qualify as a hand suitable for a Benji 2®

nerable. These are very old fashioned and opening, amongst other criteria, the sum of

nobody follows them any more; with the Rule of 15: This will help you decide if you the points and the two longest suits must be

disappearance of penalty doubles immedi- should open in fourth position. Add the 25 or more. (All correspondence should be

ately over the pre-empt, so-called unsound number of points in your hand to the directed to J. Dhondy Esq.)

pre-empts gain far more than they lose. number of spades. If the answer is fewer

than 15, then pass the hand out, otherwise Rule of 30: How do you know when to

Rule of 7: This will tell you how long to you might be outbid in spades. Some respond to your partner’s opening bid?

hold up your stopper in no-trumps. Add people call these Pearson Points. Mr Some say you must keep the bidding open

the number of cards held by you and dum- Pearson is lucky that anybody at all knows with 6 points, some say 5. I have seen

my, and subtract the total from seven. That his name. Remember: if you want lasting experts do it with 4. Indeed, Michael

is how many times you should hold up. fame you invent a Law, not a Rule. Rosenberg recommends that you should

never pass when non-vulnerable! The

Rule of 11: Everybody’s favourite. Subtract Rules of 19 and 20: These will tell you if Rule of 30 provides sounder advice: add

the opening lead from 11 and that will tell you can or should open the bidding. Add the number of points to the age of your

you how many cards higher than the lead together your points and the length of left-hand opponent. If the result is 30 or

are in your hand, dummy and with your your two longest suits and if the total is 19 fewer, pass. For example, if you hold 10

right-hand opponent. This assumes that the (or 20) you have an opening bid. Why are points and the youth on your left is 18,

lead is fourth best. Some sneaky players there two rules? Well, the Rule of 20 is you can pass with confidence. He will

play third and fifth leads. What’s the prob- what teachers teach and the Rule of 19 is protect, you can be sure of it, and you will

lem, I hear you cry, surely the Rules of 10 what teachers play. It is not widely known, make a doubled contract or score a

and 12 will work just as well. Yes, but how but the Rule of 19 is linked to the voting age. sizeable penalty! r