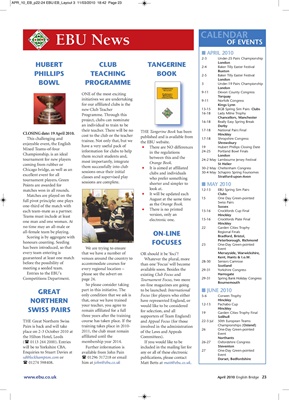 ONE of the most exciting

initiatives we are undertaking 9-11 Norfolk Congress

for our affiliated clubs is the Kings Lynn

Programme. Through this 16-18 Lady Milne Trophy

an individual to train to be Derby

their teacher. There will be no THE Tangerine Book has been 17-18 National Pairs Final

CLOSING date: 19 April 2010. cost to the club or the teacher Hinckley

trainee. Not only that, but we the EBU website. Shrewsbury

have a very useful pack of

information for clubs to help

• There are NO differences

Championship, is an ideal them recruit students and, London

coming from rubber or St Helier

Chicago bridge, as well as an

them successfully into club

sessions once their initial

• It is aimed at affiliated

excellent event for all classes and supervised play Stratford-upon-Avon

tournament players. Green who prefer something

Points are awarded for shorter and simpler to n MAY 2010

Matches are played on the • It will be updated each

August at the same time 15

one-third of the match with as the Orange Book.

each team-mate as a partner. • There is no printed

Teams must include at least Hinckley

one man and one woman. At Hinckley

no time may an all-male or 22 Garden Cities Trophy

Scoring is by aggregate with

has been introduced, so that We are trying to ensure Event

every team entering is that we have a number of OR should it be ‘foci’? Merseyside, Warwickshire,

guaranteed at least one match venues around the country to Kent, Hants & I.o.W.

Whatever the plural, more

meeting a seeded team. every regional location – available soon. Besides the 29-31 Yorkshire Congress

GREAT part in this initiative. The to be launched: International n JUNE 2010

NORTHERN that, once we have trained have represented England, or

your teacher, you agree to would like to be considered

SWISS PAIRS remain affiliated for a full for selection, and all 19 Garden Cities Trophy Final

three years after the training supporters of Team England) Solihull

THE Great Northern Swiss course has taken place. If the and Appeal Focus (for those 22-3 Jul 50th European Teams

the Hilton Hotel, Leeds affiliated until the Committees). Northants