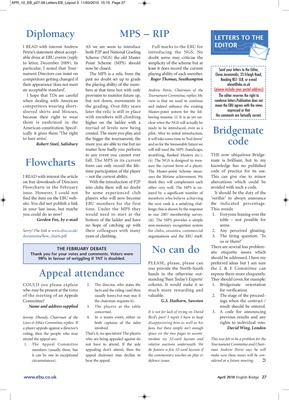 Diplomacy MPS – RIP LETTERS TO THE

Petrie’s statement about accept- both P2P and National Grading introducing the NGS. No

to letter, December 2009). In Point Scheme (MPS) should simplicity of the scheme but at

particular, I noted that Tour- now be closed. least it does record the current Send your letters to the Editor,

nament Directors can insist on The MPS is a relic from the playing ability of each member. Elena Jeronimidis, 23 Erleigh Road,

competitors getting changed if past no doubt set up to grade Roger Thomas, Southampton Reading RG1 5LR, or e-mail

their appearance ‘does not meet the playing ability of the mem- elena@ebu.co.uk

an acceptable standard’. bers at that time but with only Andrew Petrie, Chairman of the (please include your postal address)

I hope that TDs are careful provision to monitor future up, Tournament Committee, replies: My The editor reserves the right to

when dealing with American but not down, movements in view is that we need to continue condense letters.Publication does not

competitors wear ing short- the grading. Over fifty years and indeed enhance the existing mean the EBU agrees with the views

sleeved shirts and blouses, later the relic is still in place Master-point system for the fol- expressed or that

because their right to wear with members still climbing lowing reasons: (i) It is as yet un- the comments are factually correct.

ically it gives them ‘The right

myriad of levels now being

created. The more you play, and

ready to be introduced, even as a

pilot. After its initial introduction, Bridgemate

the bigger the tournament, the

more you are able to rise but no

it will take some time to ‘bed down’

and so for the foreseeable future we code

matter how badly you perform will still need the MPS (handicaps,

in any event you cannot ever stratifying, Ranked Masters etc.). THE now ubiquitous Bridge-

Flowcharts fall. The MPS in its current

form can only record the life-

(ii) The NGS is designed to mea-

sure the current form of a player.

mate is brilliant, but to my

knowledge has no published

time participation of the player The Master-point Scheme meas- code of practice for its use.

I READ with interest the article – not the current ability. ures the lifetime achievement. We This can give rise to minor

Flowcharts in the February into clubs there will no doubt other very well. The MPS is en- avoided with such a code.

issue. However, I could not be some experienced club joyed by a significant number of It should be the duty of the

site. You did not publish a link EBU members for the first the next rank is a satisfying chal- the indicated percentage.

in your last issue, but maybe time. Under the MPS they lenge; this is shown by the response This avoids:

you could do so now? would need to start at the to our 2007 membership survey. 1. Everyone leaning over the

Gordon Fox, by e-mail bottom of the ladder and have (iii) The MPS provides a simple table – not possible for

no hope of catching up with non-monetary recognition system some.

Sorry! The link is www.ebu.co.uk/ their colleagues with many for clubs, counties, commercial 2. Any perceived gloating.

documents/flow_charts.pdf years of climbing. organisations and the EBU itself. 3. The tiring question: ‘To

There are several less problem-

Thank you for your votes and comments. Voters were

No can do atic etiquette issues which

98% in favour of wriggling if 1NT is doubled. should be addressed. I have my

PLEASE, please, please can preferred ideas but I am sure

you provide the North-South the L & E Committee can

Appeal attendance hands in the otherwise out-

They should cover, for example:

COULD you please explain 2. The director, who states the column. It would make it so 1. Bridgemate orientation

who may be present at the time facts and the ruling (and then much more rewarding and for verification.

of the meeting of an Appeals usually leaves but may stay if valuable. 2. The stage of the proceed-

Committee? the chairman requests it). G.S. Hathorn, Sawston ings when the contract /

Name and address supplied 3. The players at the table result should be entered.

concerned. It is not for lack of trying on David 3. A code for announcing

Jeremy Dhondy, Chairman of the 4. In a teams event, either or Bird’s part! I regret I have to keep previous results and any

Laws & Ethics Committee, replies: If both captains of the sides disappointing him as well as his rights to individual veto.

a player appeals against a director’s involved. fans, but there simply isn’t enough David Wing, London

ruling, then the people who may That’s it, no spectators! The players space on the two pages to accom-

attend the appeal are: who are being appealed against do modate six 52-card layouts and This was felt to be a problem for the

1. The Appeal Committee not have to attend. If the side relative auctions underneath. We Tournament Committee and Chair-

members (usually three, but appealing don’t attend, then the do feature a few 52-card layouts if man Andrew Petrie says he will