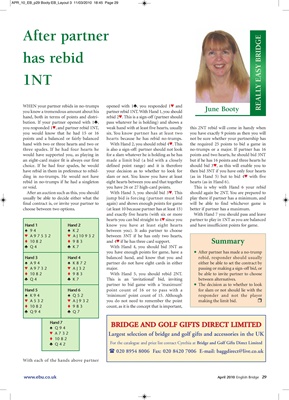 WHEN your partner rebids in no-trumps opened with 1®, you responded 1™ and

you know a tremendous amount about his partner rebid 1NT. With Hand 1, you should June Booty

hand, both in terms of points and distri- rebid 2™. This is a sign-off (partner should

bution. If your partner opened with 1®, pass whatever he is holding) and shows a

you responded 1™, and partner rebid 1NT, weak hand with at least five hearts, usually this 2NT rebid will come in handy when

you would know that he had 15 or 16 six. You know partner has at least two you have exactly 9 points as then you will

points and a balanced or fairly balanced hearts because he has rebid no-trumps. not be sure whether your partnership has

hand with two or three hearts and two or With Hand 2, you should rebid 4™. This the required 25 points to bid a game in

three spades. If he had four hearts he is also a sign-off: partner should not look no-trumps or a major. If partner has 16

would have supported you, as playing in for a slam whatever he is holding as he has points and two hearts, he should bid 3NT

choice. If he had four spades, he would defined point range) and it is therefore should bid 3™, as this will enable you to

ding in no-trumps. He would not have slam or not. You know you have at least (as in Hand 5) but to bid 4™ with five

rebid in no-trumps if he had a singleton eight hearts between you and that together hearts (as in Hand 6).

After an auction such as this, you should With Hand 3, you should bid 3™. This should again be 2NT. You are prepared to

usually be able to decide either what the jump bid is forcing (partner must bid play there if partner has a minimum, and

final contract is, or invite your partner to again) and shows enough points for game will be able to find whichever game is

Hand 1 Hand 2 know you have at least eight hearts and have insufficient points for game.

you have enough points for game, have a • After partner has made a no-trump

Hand 3 Hand 4 balanced hand, and know that you and rebid, responder should usually

® Q4 ® K7 This is an ‘invitational’ bid, inviting between alternatives.

With each of the hands above partner