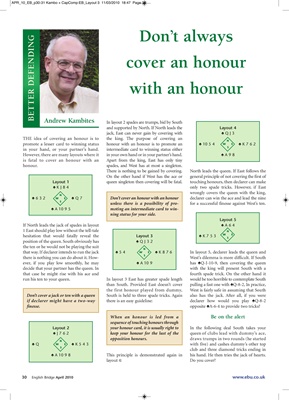 Andrew Kambites In layout 2 spades are trumps, bid by South

and supported by North. If North leads the Layout 4

jack, East can never gain by covering with ´QJ3

in your hand, or your partner’s hand. intermediate card to winning status either

However, there are many layouts where it in your own hand or in your partner’s hand. ´A98

is fatal to cover an honour with an Apart from the king, East has only tiny

honour. spades, and West has at most a singleton.

There is nothing to be gained by covering. North leads the queen. If East follows the

Layout 1 queen singleton then covering will be fatal. touching honours, then declarer can make

´KJ84 only two spade tricks. However, if East

wrongly covers the queen with the king,

unless there is a possibility of pro- for a successful finesse against West’s ten.

ning status for your side.

If North leads the jack of spades in layout ´A64

1 East should play low without the tell-tale N

hesitation that would fatally reveal the Layout 3 ´K753 S

position of the queen. South obviously has ´QJ32

the ten or he would not be playing the suit N

that way. If declarer intends to run the jack ´54 W E ´K876 In layout 5, declarer leads the queen and

there is nothing you can do about it. How- West’s dilemma is more difficult. If South

decide that your partner has the queen. In with the king will present South with a

that case he might rise with his ace and fourth spade trick. On the other hand it

run his ten to your queen. In layout 3 East has greater spade length would be too horrible to contemplate South

than South. Provided East doesn’t cover pulling a fast one with ´Q-8-2, In practice,

the first honour played from dummy, West is fairly safe in assuming that South

Don’t cover a jack or ten with a queen South is held to three spade tricks. Again also has the jack. After all, if you were

if declarer might have a two-way there is an easy guideline: declarer how would you play ´Q-8-2

finesse. opposite ´A-6-4 to provide two tricks?

When an honour is led from a Be on the alert

sequence of touching honours through

Layout 2 your honour card, it is usually right to In the following deal South takes your

´J762 keep your honour for the last of the queen of clubs lead with dummy’s ace,

´ A 10 9 8 This principle is demonstrated again in his hand. He then tries the jack of hearts.