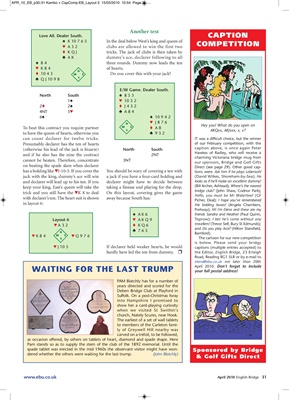 ™ A32 clubs are allowed to win the first two COMPETITION

t KQJ tricks. The jack of clubs is then taken by

Hey you! What do you open on

To beat this contract you require partner W E t A8

to have the queen of hearts, otherwise you ® 932

can count declarer for twelve tricks. IT was a difficult choice, but the winner

Presumably declarer has the ten of hearts of our February competition, with the

(otherwise his lead of the jack is bizarre) North South cap tion above, is once again Peter

Hawkes of Radley, who will receive a

and if he also has the nine the contract 2NT

on beating the spade slam when declarer Direct (see page 29). Other good cap-

has a holding like ™J-10-5. If you cover the You should be wary of covering a ten with tions were: Ask him if he plays Lebensohl

jack with the king, dummy’s ace will win a jack if you have a four-card holding and (David Wilkes, Shoreham-by-Sea); He

and declarer will lead up to his ten. If you declarer might have to decide between looks as if he'll make an excellent dummy!

keep your king, East’s queen will take the taking a finesse and playing for the drop. (Bill Archer, Ashtead); Where’s the nearest

trick and you still have the ™K 8 to deal On this layout, covering gives the game

Hello, you must be Mr Waterlow! (GF

with declarer’s ten. The heart suit is shown away because South has: Picher, Deal); I hope you’ve remembered

Portway); Hi! I'm Elena and these are my

and Do you play Acol? (Hilton Stansfield,

™ J 10 5 If declarer held weaker hearts, he would captions (multiple entries accepted) to

hardly have led the ten from dummy. r the Editor, English Bridge, 23 Erleigh

Road, Reading RG1 5LR or by e-mail to

WAITING FOR THE LAST TRUMP your full postal address!

PAM Blatchly has for a number of

years directed and scored for the

Deben Bridge Club at Playford in

Suffolk. On a post-Christmas foray

into Hampshire I promised to

show her a card-playing curiosity

when we visited St Swithin's

The earliest of a set of wall tablets

to members of the Carleton fami-

ly of Greywell Hill nearby was

carved on a trefoil, to be followed,

as occasion offered, by others on tablets of heart, diamond and spade shape. Here

Pam stands so as to supply the stem of the club of the 1892 memorial. Until the

dered whether the others were waiting for the last trump. (John Blatchly)