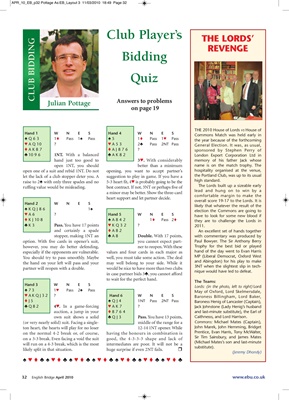 hand just too good to 3™. With considerably memory of his father Jack whose

open 1NT, you should better than a minimum name is on the match trophy. The

open one of a suit and rebid 1NT. Do not opening, you want to accept partner’s hospitality organised at the venue,

let the lack of a club stopper deter you. A suggestion to play in game. If you have a the Portland Club, was up to its usual

raise to 2´ with only three spades and no 5-3 heart fit, 4™ is probably going to be the high standard.

ruffing value would be misleading. best contract. If not, 3NT or perhaps five of The Lords built up a sizeable early

lead and hung on to win by a

a minor may be better. Show the three-card

comfortable margin to make the

likely that whatever the result of the

´KQJ86 1´ election the Commons are going to

and certainly a spade tA82 An excellent set of hands together

stopper, making 1NT an ®A 8 Double. With 17 points, with commentary was produced by

however, you may do better defending, ner to reopen. With these Trophy for the best bid or played

especially if the opponents are vulnerable. values and four cards in each major as hand of the day went to Evan Harris

You should try to pass smoothly. Maybe well, you must take some action. The deal MP (Liberal Democrat, Oxford West

the hand on your left will pass and your may well belong to your side. While it and Abingdon) for his play to make

3NT when the slightest slip in tech-

partner will reopen with a double. would be nice to have more than two clubs

nique would have led to defeat.

to wait for the perfect hand. The Teams:

auction, a jump in your t8764 and last-minute substitute), the Earl of

own suit shows a solid ®Q J 3 Pass. You have 13 points, Caithnesss, and Lord Harrison.

(or very nearly solid) suit. Facing a single- middle of the range for a Commons: Michael Mates (Captain),

on the normal 4-2 break or, of course, having the honours in combination is Prentice, Evan Harris, Tony McWalter,

will run on a 4-3 break, which is the most intermediates are poor. It will not be a