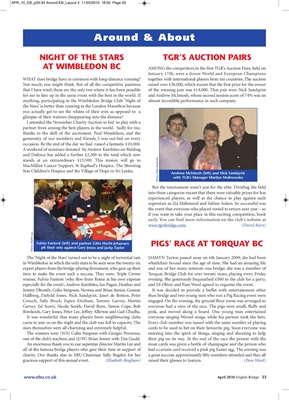 AT WIMBLEDON BC AMONG the competitors in the first TGR’s Auction Pairs, held on

January 17th, were a dozen World and European Champions

WHAT does bridge have in common with long-distance running? together with international players from ten countries. The auction

Not much, you might think. But of all the competitive pastimes raised over £38,000, which meant that the first prize for the owner

that I have tried, these are the only two where it has been possible of the winning pair was £14,000. That pair were Nick Sandqvist

for me to line up in the same event with the best in the world. If and Andrew McIntosh, whose second session score of 74% was an

anything, participating in the Wimbledon Bridge Club ‘Night of almost incredible performance in such company.

the Stars’ is better than running in the London Marathon because

glimpse of their trainers disappearing into the distance!

partner from among the best players in the world. Sadly for me,

thanks to the skill of the auctioneer, Paul Mendelson, and the

generosity of our members and friends, I was out-bid on every

A weekend of seminars donated by Andrew Kambites on Bidding

and Defence has added a further £2,500 to the total which now Photo: Peter Hasenson

stands at an extraordinary £13,500. This money will go to

But the tournament wasn’t just for the elite. Dividing the field

into three categories meant that there were valuable prizes for less

experienced players, as well as the chance to play against such

superstars as Zia Mahmood and Sabine Auken. So successful was

if you want to take your place in this exciting competition, book

early. You can find more information on the club’s website at

pit their wits against Gary Jones and Jacky Taylor

PIGS’ RACE AT TORQUAY BC

The ‘Night of the Stars’ turned out to be a night of torrential rain JASMYN Turton passed away on 6th January 2009; she had been

in Wimbledon in which the only stars to be seen were the twenty-six wheelchair bound since the age of nine. She had an amazing life

expert players from the bridge-playing firmament, who gave up their and one of her many interests was bridge; she was a member of

time to make the event such a success. They were: Triple Crown Torquay Bridge Club for over twenty years, playing every Friday

winner, Fulvio Fantoni (who flew from Rome at his own expense evening. She generously bequeathed £500 to the club for a party,

especially for the event), Andrew Kambites, Ian Pagan, Heather and and Di Oliver and Pam Ward agreed to organise the event.

Jeremy Dhondy, Colin Simpson, Nevena and Brian Senior, Gunnar It was decided to provide a buffet with entertainment other

Garvey, Ed Scerri, Nicola Smith, David Burn, Simon Cope, Bob everyone had a view of the race. The pigs were small, fluffy and

Rowlands, Gary Jones, Peter Lee, Jeffrey Allerton and Gad Chadha. pink, and moved along a board. One young man entertained

It was wonderful that many players from neighbouring clubs everyone singing Worzel songs, while his partner took the bets.

came to join us on the night and the club was full to capacity. The Every club member was issued with the same number of playing

stars themselves were all charming and extremely helpful. cards to be used to bet on their favourite pig. Soon everyone was

The winners were (N/S) Colin Simpson with Giorgio Provenza, entering into the spirit of things, singing and shouting to help

one of the club’s teachers, and (E/W) Brian Senior with Tim Gauld. their pig on its way. At the end of the race the person with the

all of the famous bridge players who gave their time in support of had a certain card received a pink pig Easter egg. The evening was

charity. Our thanks also to EBU Chairman Sally Bugden for her a great success: approximately fifty members attended and they all