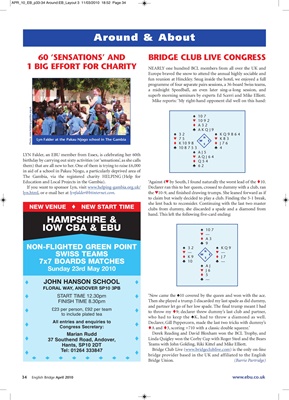 Europe braved the snow to attend the annual highly sociable and

fun reunion at Hinckley. Snug inside the hotel, we enjoyed a full

programme of four separate pairs sessions, a 36-board Swiss teams,

a midnight Speedball, an even later sing-a-long session, and

Mike reports: ‘My right-hand opponent did well on this hand:

LYN Falder, an EBU member from Essex, is celebrating her 60th ™ AQJ64

birthday by carrying out sixty activities (or ‘sensations’, as she calls t Q54

in aid of a school in Pakau Njogu, a particularly deprived area of

The Gambia, via the registered charity HELPING (Help for

Education and Local Projects in the Gambia). ‘Against 4™ by South, I found naturally the worst lead of the t10.

If you want to sponsor Lyn, visit www.helping-gambia.org.uk/ Declarer ran this to her queen, crossed to dummy with a club, ran

lyn.html, or e-mail her at lynfalder@btinternet.com. the ™10-9, and finished drawing trumps. She leaned forward as if

to claim but wisely decided to play a club. Finding the 5-1 break,

she lent back to reconsider. Continuing with the last two master

NEW VENUE ♦ NEW START TIME clubs from dummy, she discarded a spade and a diamond from

FINISH TIME 8.30pm Then she played a trump. I discarded my last spade as did dummy,

and partner let go of her low spade. The final trump meant I had

to include plated tea

who had to keep the ´K, had to throw a diamond as well.

All entries and enquiries to Declarer, Gill Peppercorn, made the last two tricks with dummy’s

♦ ♦ bridge provider based in the UK and affiliated to the English