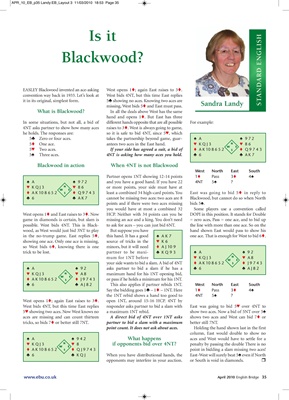 convention way back in 1933. Let’s look at West bids 4NT, but this time East replies

it in its original, simplest form. 5® showing no aces. Knowing two aces are

What is Blackwood? In all the deals above West has the same

hand and opens 1t. But East has three

In some situations, but not all, a bid of different hands opposite that are all possible For example:

4NT asks partner to show how many aces raises to 3t. West is always going to game,

he holds. The responses are: so it is safe to bid 4NT, since 5™, which

Blackwood in action When 4NT is not Blackwood

® 6 ® AK7 cannot be missing two aces: two aces are 8 Blackwood, but cannot do so when North

points and if there were two aces missing bids 5´.

West opens 1t and East raises to 3t. Now HCP. Neither with 34 points can you be DOPI in this position. It stands for Double

game in diamonds is certain, but slam is missing an ace and a king. You don’t need = zero aces, Pass = one ace, and to bid up

possible. West bids 4NT. This is Black- to ask for aces – you can just bid 6NT. the line with more than one ace. So on the

wood, as West would just bid 3NT to play But suppose you have hand shown East would pass to show his

showing one ace. Only one ace is missing, source of tricks in the ™ K6

West bids 4NT, but this time East replies responder asks partner to bid a slam with East was going to bid 5™ over 4NT to

point count. It does not ask about aces. Holding the hand shown last in the first

column, East would double to show no

™ 8 if opponents bid over 4NT? penalty by passing the double There is no

® 6 ® KQJ When you have distributional hands, the East-West will surely beat 5´ even if North

opponents may interfere in your auction. or South is void in diamonds. r