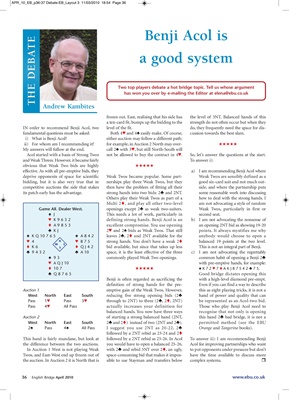 THE DEBATE Benji Acol is

frozen out. East, realising that his side has the level of 3NT. Balanced hands of this

a ten-card fit, bumps up the bidding to the strength do not often occur but when they

IN order to recommend Benji Acol, two level of the fit. do, they frequently need the space for dis-

fundamental questions must be asked: Both 4™ and 4´ easily make. Of course, cussion towards the best slam.

i) What is Benji Acol? either auction may follow a different path:

ii) For whom am I recommending it? for example, in Auction 2 North may over- HHHHH

My answers will follow at the end. call 2´ with 3™, but still North-South will

Acol started with a basis of Strong Twos not be allowed to buy the contract in 4™. So, let’s answer the questions at the start.

and Weak Threes. However, it became fairly To answer i):

effective. As with all pre-emptive bids, they a) I am recommending Benji Acol where

deprive opponents of space for scientific Weak Twos became popular. Some part- Weak Twos are sensibly defined as a

bidding, but it is also very true that in nerships play three Weak Twos, but they good six-card suit and not much out-

competitive auctions the side that stakes then have the problem of fitting all their side, and where the partnership puts

its patch early has the advantage. strong hands into two bids: 2® and 2NT. some reasonable work into discussing

Others play their Weak Twos as part of a how to deal with the strong hands. I

Multi 2t , and play all other two-level am not advocating a style of random

Game All. Dealer West. openings except 2® as weak two-suiters. Weak Twos, particularly in first or

´ J This needs a lot of work, particularly in second seat.

™ K9632 defining strong hands. Benji Acol is an b) I am not advocating the nonsense of

t A9853 excellent compromise. You use opening an opening 2NT bid as showing 19-20

® KJ 2™ and 2´ bids as Weak Twos. That still points. It always mystifies me why

t K6 S t QJ42 bid available, but since that takes up less This is not an integral part of Benji.

Benji is often regarded as sacrificing the with a high-level diamond pre-empt.

Auction 1 emptive gain of the Weak Twos. However, this as eight playing tricks, it is not a

balanced hands. You now have three ways recognise that not only is opening

Auction 2 of starting a strong balanced hand (2NT, this hand 2® bad bridge, it is not a

This hand is fairly mundane, but look at followed by a 2NT rebid as 25-26. In Acol To answer ii): I am recommending Benji

the difference between the two auctions. you would have to open a balanced 25-26, Acol for improving partnerships who want

In Auction 1 West is not playing Weak with 2® and rebid 3NT over 2t, an ugly, to put opponents under pressure but don’t

Twos, and East-West end up frozen out of space-consuming bid that makes it impos- have the time available to discuss more

the auction. In Auction 2 it is North that is sible to use Stayman and transfers below complex systems. r