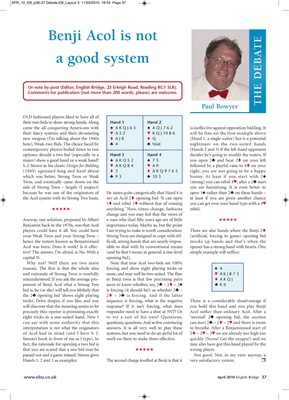 Benji Acol is not

OLD fashioned players liked to have all of

their two-bids to show strong hands. Along Hand 1 Hand 2

came the all conquering Americans with ´ AKQJ63 ´ AQJ762 is ineffective against opposition bidding. It

here), Weak-two Bids. The choice faced by ® 4 ® Void nightmare on the two-suited hands

options: should a two bid (especially in a Hand 3 Hand 4 decides he’s going to muddy the waters. If

S. J. Simon in his classic Design for Bidding ™ AKQ84 ™ A9 followed by a playful raise to 4t on your

Twos, and eventually came down on the (strong) you can rebid 4™; after a 2® start

side of Strong Twos – largely (I suspect) you are hamstrung. It is even better to

the Acol system with its Strong Two basis. not an Acol 2t opening bid: ‘It can open at least if you are given another chance

change and you may feel that the views of

Anyway, one solution, proposed by Albert a man who died fifty years ago are of little HHHHH

Benjamin back in the 1970s, was that Acol importance today. Maybe so, but the point

players could have it all. You could have I am trying to make is worth consideration: There are also hands where the Benji 2t

your Weak Twos and your Strong Twos – Strong Twos are designed to cope with dif- (artificial, forcing to game) opening bid

hence the system known as Benjaminised ficult, strong hands that are nearly impos- mucks up hands and that’s when the

Acol was born. Does it work? Is it effec- sible to deal with by conventional means opener has a strong hand with hearts. One

tive? The answer, I’m afraid, is No. With a (and by that I mean, in general, a one-level simple example will suffice:

Why not? Well there are two main Note that true Acol two-bids are 100%

reasons. The first is that the whole idea forcing and show eight playing tricks or ´ A

and rationale of Strong Twos is woefully more, and may well be two-suited. The flaw ™ AKJ873

misunderstood. If you ask the average pro- in Benji twos is that few practising pairs t AKQJ

bid is, he (or she) will tell you blithely that is forcing (it should be!) or whether 2® –

the 2® opening bid ‘shows eight playing 2t – 3® is forcing. And if the latter

tricks’. Delve deeper, if you like, and you sequence is forcing, what is the negative There is a considerable disadvantage if

will discover that the meaning seems to be response? If it isn’t forcing, what does you hold this hand and you play Benji

precisely this: opener is promising exactly responder need to have a shot at 3NT? Or Acol rather than ordinary Acol. After a

eight tricks in a one-suited hand. Now I to try a suit of his own? Questions, ‘normal’ 2® opening bid, the auction

can say with some authority that this questions, questions. And so few convincing can start 2® – 2t – 2™ and there is room

interpretation is not what the originators answers. It is all very well to play these to breathe. After a Benjaminised start of

Simon’s book in front of me as I type). In work on them to make them effective. quickly (Nurse! Get the oxygen!) and we

fact, the rationale for opening a two bid is may also have got this hand played by the

that you are scared that a one bid may be HHHHH wrong player.

passed out and a game missed. Simon gives Not good. Not, in my view anyway, a

Hands 1, 2 and 3 as examples: The second charge levelled at Benji is that it very satisfactory system. r