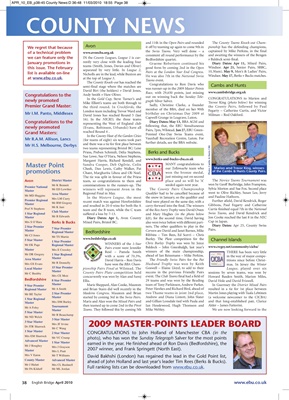 We regret that because Avon it off by teaming up again to come 9th in pionship has the defending champions,

of a technical problem www.avoncba.org.uk the Swiss Teams. Very well done – a captained by Mike Perkins, in the final

we can feature only the IN the County Leagues, League 1 is cur- Bedfordshire quartet. v Baldock semi-final.

this issue. The February separated by very little. In League 2,

good form by coming 2nd in the Open

Nicholls are in the lead, while Buxton are Windsor. May 17, Berks v Bucks matches.

He was also 7th in the National Swiss

The County Knock-out has reached the

Congratulations to Ron Davis who Cambs and Hunts

semi-final stage where the matches are

was runner-up in the 2009 Master Points

out on winning back the Sunday Tele- CONGRATULATIONS to Marion and

In the Gold Cup, Steve Turner’s and

newly promoted Mike Elliott’s teams are both through to

the third round. In Crockfords, the

member of the BBA, died on her 90th Fegarty – Catherine Curtis, and Victor

London team including Trevor Ward and

Congratulations to the representing the West of England club Diary Dates: May 13, BBA AGM and

newly promoted (Evans, Robinson, Urbanski) have all following that, the EBU Simultaneous

In the County Heat of the Garden Cities

and there was a tie for first place between further details, see the BBA website.

Avon District Master team, so congratulations to them and place and so will be ‘A’ The Novice Teams Tournament was

Area Master Regional Final in May. Qualifier had to be cancelled because of went to Olive Richley, Susan Lee, Jerry

Mrs LM Curry In the Western League, the most the snow in January, so the qualifier and

Premier Regional recent match was against Herefordshire final were played on the same day, with a Further afield, David Kendrick, Roger

and resulted in 20-0 wins for both the A carry-forward into the final. The winners Gibbons, Paul Fegarty and Catherine

Prof N Stephens team and the B team, while the C team of the Rex Avery Trophy were David Owen Curtis finished equal 7th in the National

1 Star Regional suffered a loss by 7-13. and Mary Hughes (in the photo below Swiss Teams, and David Kendrick and

2 Star Premier ners. The other qualifiers to play in the Diary Dates: Apr 25, County Swiss

Reid – Pamela Smith winners of the main championship, THERE has been very little

have won the BBA Cham- mas. In Jersey the Winter

Master success in the previous Friendly Pairs sessions by seven teams, was won by

Bedfordshire 8 Star Premier Ellis. 29 teams and was won by the Reading David Hole and David Friswell.

Regional Master Mr A Smith and Brian Stairs did well recently in the Peter Hawkes and Richard Bird, ahead of resulted in a tie for 1st place between

Master started by coming 3rd in the Swiss Pairs. Andrew and Diana Lintott, John Slater (a welcome newcomer to the CICBA)

Master Mrs DM Burley Maris and Alan won the Mixed Pairs and and Gillian Lonsdale tied with Paula and and that long-established pair, Clarice

Tournament then teamed up to come 2nd in the Pivot Ian Hesslewood, Hugh Thomson and Alder – James Fattorini.

Master Teams. They followed this by coming 5th Mike Webley. We are now looking forward to the

Mr VC Crump photo), who has won the Sunday Telegraph Salver for the most points

earned in the year. He finished ahead of Ron Davis (Bedfordshire), the