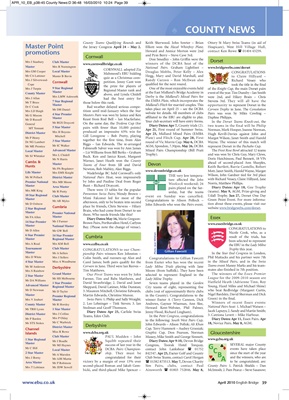 www.cornwallbridge.co.uk winners of the DCBA heat of the

quiz as a Christmas com-

Cope qualified for the next round. took the title in the final

the prize for players of

Mrs J Turpin 9 Star Regional One of the most enjoyable events held of the Knight Cup, the main Dorset pairs

Mrs LMW Ashworth Derby is the Midland’s Mixed Pairs for were 2nd, and Hilary Brain – Chris

had the best entry for

Mr T Brass 7 Star Regional the EMBA Plate, which incorporates the Stevens 3rd. They will all have the

those below this rank.

Master Midland’s Flitch for married couples. This opportunity to represent Dorset in the

Mrs LD Haigh tition until mid-January when the Star

4 Star Premier website for details. All members of clubs Pairs was won by Miles Cowling –

Master affiliated to the EBU are eligible to play. Daphne Philipps.

Mr RGS Draycott Your club secretary will have entry forms. In the Dorset Teams Knock-out, the

General On the same day, the Tredova Cup (for

Diary Dates: Apr 7, County trials (2). two teams in the final will be Philip

3 Star Master together for the first time, from Alan

Dr NG Lambert round of Vic Morris Cup. May 6, DCBA Wayne. The winner of this match will

ahead of second-placed Ann Sharples,

There were 13 tables for the popular (teams). May 9, AGM, Prize-giving and

Master Mimi Falconer led for most of the Green Point Event. For more informa-

afternoon, only to be beaten into second tion about these events, please visit our

Brain, who had come from Dorset to see

Nicole Cook, who, as a

Cumbria result of the trials, has

been selected to represent

Mrs A Read Mrs KM Bell www.ccdba.co.uk the EBU in the Lady Milne

Tournament Club Master CONGRATULATIONS to our Cham - Trophy this year.

4 Star Master Miss A Woodburne Carol James; both pairs qualify for the from Exeter who has won the recent in the Mixed Pairs, and in the Swiss

Mrs J Borny Mr AJH Martin congratulated for their Club Swiss Teams, contact Carol Horgan and the winners, who are