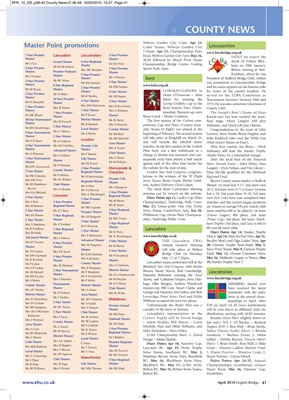 SADLY we report the

Master 5 Star Premier fordshire, where he was

Mr WE Herbert 5 Star Master was prominent in Leicestershire bridge

Master 4 Star Master CONGRATULATIONS to for many of the county trophies. He

Master George Griffiths Cup in the 1973. He was also sometime Chairman of

Mrs B Forsyth final stage, where Langley will play

Congratulations to the team of John

Area Master and will include the Mitchell Salver (Non-expert Teams of Four).

Mrs S Gilbert change in format was necessary and con- (Butler Pairs) by a substantial margin.

Mr KW Gravestock the website for the state of play.

Mrs EA Mitchell 1 Star Premier minutes can be viewed on the website.

Mrs B Roberts Regional Master Ms B Serres May 23, Green-point One Day Event

Mr PB Cogliatti are (based on average VPs per match, with

Master casualty of the snow in January. will be sent direct to affiliated clubs for