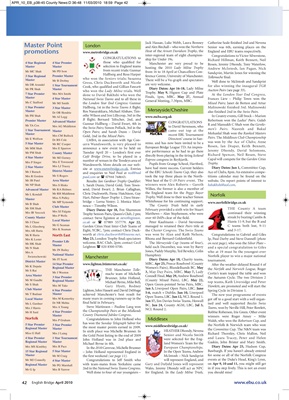 Master Point London and Alex Birchall – who won the Northern Senior was 6th, earning places on the

promotions www.metrobridge.co.uk Heat of the Arnott Davidson Trophy, the

4 Star Regional 4 Star Premier those who qualified for Manchester are very proud to be Rosen, Jeremy Dhondy, Tony Waterlow,

Hallberg and Ross Harper Sandqvist, Martin Jones for winning the

Master who won the Seniors trials; Susanna There will be a Vu-graph and spectators

Mr B Drobny Well done to McIntosh and Sandqvist

who won the Lady Milne trials. Well Trophy. May 9, Higson Cup and Plate

the Swiss Pairs; Simon Pollack, 3rd in the to David Stevenson, who

1 Star Tournament Master came out top at the men’s Pairs. Nasresh and Bakul

Dr BS Cole LMBA, in association with Age Con- was won by the Ace of Clubs; Anne

5 Star Master Mr RC Cooper cern Wandsworth, is very pleased to remo. and has now been invited to be a

sive performance as he had to go there Jeremy Dhondy, David Solomons,

Café Bridge Drive, to be played in a directly from playing in the tiring Iceland Richard Spencer, Neil Rosen, Steve

number of venues in the Tonsleys area of Express congress in Reykjavik. Capal will compete for the Garden Cities

and enquiries to Ned Paul at ned@ned

Mr B Shah The County Trials held in early

Mr R Haria North East worth at chris.duckworth@lineone.net. was won by Alan and Kath Nelson, Congratulations to Gabriel and Giles

Mr HK Shah on next page), who won the Silver Plate –

Mrs A who at 19 must be the youngest-ever

14 Star Premier www.lighton.btinternet.co.uk/ MBC. Apr 25, Preece Rosebowl (County After the weather-delayed Round 4 of

Gary Hyett, Rodney Howlett, are promoted and will start the

The new year programme of events

Mrs M Kennerley many years in coming runners-up in the Open Teams, LBC. Jun 12, NCL Round 1.

the Championship Pairs at the Midlands NCL Round 2.

5 Star Premier has won the Sunday Telegraph Salver for

Regional Master Master the most master points earned in 2009.

HEATHER Dhondy, Nevena the Committee Cup. The N&N team was

In sixth place was Michelle Brunner. In

John Holland was in 2nd place and were selected for the Eng- and Laura Tracey, Peter and Helen

Michael Byrne in 4th. land Women’s Team for the

Master Mr M Craig the first weekend (see page 11). McIntosh – Nick Sandqvist for some or all of the Norfolk Congress

Regional Master Mr PG Marshall with team-mates from Yorkshire came Gary and Dafydd Jones will represent on Apr 9, 10 and 11, you might still get

Mr G Ip Mrs B Yarrow 2nd in the National Swiss Teams Congress. Wales. Jeremy Dhondy will act as NPC in if you step lively. This is not an event

Well done to four of our youngsters – for England. In the Lady Milne Trials, you should miss!