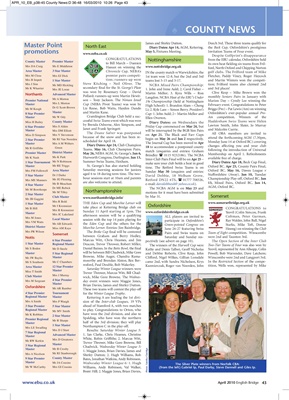 Pollard; runners-up were Martin Hewit- Langdon. NCBA Heat of the EBU’s Under monthly Seniors Pairs in January with

Janet and Frank Springett will be interrupted by the BGB Sim Pairs and Malcolm Currie.

The Deane Salver was postponed on Apr 21. The Black and Farr Cups All OBA members are invited to

because of the snow and has been re- begin on May 26 and Jun 2 respectively. attend the forthcoming AGM (7.30pm,

scheduled for April 18. The Journal Cup has been moved to Apr Monday June 14 at Oxford BC) covering

Diary Dates: Apr 24, Club Champion 18 to accommodate a postponed county changes affecting you and your club

Inter-Club Pairs Final will be on Apr 25 –

Dr ME Rebick The NCBA AGM is on May 23 and AGM, Oxford BC.

Mr M Tilley Northamptonshire motions for it must have been submitted

1 Star Master THE Eden Cup and Murchie Lerner will

Mrs JC Lakeland afternoon session will be a qualifying

Mr AB Edwards the Eden Cup and the others for the Green-pointed Congress on Starks, Mike Toft, Donne

Mrs PR Wilson The Broke Cup final will be contested Pairs and Swiss teams on Team of Eight competition. Winscombe

Somerset between Graham and Berry Hedley,

Notts Saturday and Sunday res- were 2nd and Taunton 3rd.

Mr AR Bamber These two teams will contest the play-off

Regional Master Master Kettering A are leading the 1st divi-

3 Star Premier 5 Star Master ahead of Stamford A, with two matches

have won the 2nd division, and also to

Premier Regional Spalding, who have won the northern

Master half of the 3rd division; they will play