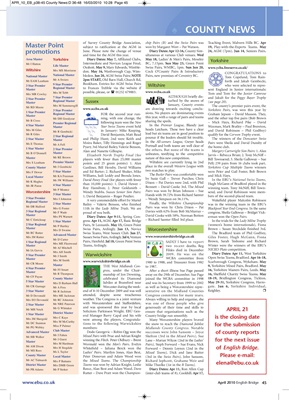 of Surrey County Bridge Association, ship Pairs (B) and the Swiss Pairs was Teaching Event, Malvern Hills BC. Apr

Master Point subject to ratification at the AGM in won by Margaret Wort – Pat Watson. 19, Play-with-the-Experts Teams. May

and time for the AGM this year.

Regional Master to Frances Trebble via the website if

Wiltshire who were selected to repre-

Regional Master Sussex turbed by the snows of (see page 20).

3 Star Premier www.sccba.co.uk are drawing towards exciting conclu- Yorkshire Pairs, was won this year by

Master this year, with a range of pairs and teams

Mr DH Goodyear ning, with one change, the and the other top five pairs (Bob Brown

Mr B Cross sharing the spoils.

2 Star Regional pounce if the leaders should hit trouble.

2 Star Master Master and Philip Hunt; 2nd were Keith and The winners of the Doncaster Swiss

Moira Baker, Tilly Hennings and Roger In the All-comers League, Gwyer heads Pairs were Sheila and David Dunsby of

1 Star Master 2 Star Premier the others. But none of the teams is

Mr B O’Donnell unbeaten, testifying to the competitive

Master Mr RE Brown nature of this new competition.

2 Star Master Bailey – Valerie Benson, who finished Finally, the Wiltshire Championship was in the winning team in the EBU’s

Mrs G Foster 11th in the Lady Milne Trials. We are Blackpool Year End Congress. In the same

5 Star Premier Warwickshire 2009. He was on the Diary Dates: Apr 11, West Yorkshire

Mr R Thompson manship of Jon Downing, away on the 29th of December. Sue Page 16, Sheffield Charity Swiss Teams. May

Mr CR Gamage Mr A Foss Worcester during the week- as well as being a Worcestershire repre- gate. Jun 6, Yorkshire Individual,

Mr D Devonald Mrs ME Jackman attended, despite some treacherous Congress committee for many years.

Mrs EO Devonald Mr RC Johnston weather. The Congress is a joint venture Always willing to help and organise, she

2 Star Master Mr NRE Paterson with Worcestershire and Staffordshire, was one of those people who give

Solicitors Parkinson Wright. EBU Gen- ensure that organisations such as the APRIL 21

were among the players. Congratula- Many Worcestershire players braved

is the closing date

Mr J Guest winning the Flitch. Peter Oldbury – Brent Lane – Marian Wilcox (2nd in the Ladies’ for the next issue