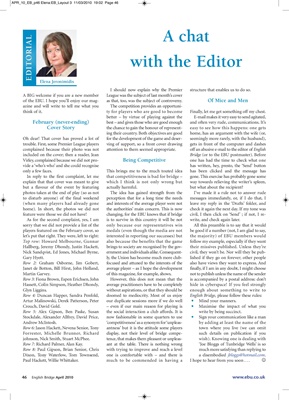 I should now explain why the Premier structure that enables us to do so.

of the EBU. I hope you’ll enjoy our mag- as that, too, was the subject of controversy. Of Mice and Men

think of it. ty for players who are good to become Finally, let me get something off my chest.

better – by virtue of playing against the E-mail makes it very easy to send agitated,

February (never-ending) best – and gives those who are good enough and often very rude, communications. It’s

Cover Story the chance to gain the honour of represent- easy to see how this happens: one gets

ing their country. Both objectives are good home, has an argument with the wife (or,

Oh dear! That cover has proved a lot of for the development of the game and deser- seemingly more rarely, with the husband),

trouble. First, some Premier League players ving of support, so a front cover drawing gets in front of the computer and dashes

complained because their photo was not attention to them seemed appropriate. off an abusive e-mail to the editor of English

included on the cover; then a reader, Jean Bridge (or to the EBU postmaster). Before

Virley, complained because we did not pro- Being Competitive one has had the time to check what one

vide a ‘who’s who’ and she could recognise has written, hey, presto, the ‘Send’ button

only a few faces. This brings me to the much touted idea has been clicked and the message has

In reply to the first complaint, let me that competit ive ness is bad for bridge – gone. This exercise has probably gone some

explain that that cover was meant to give which I think is not only wrong but way towards relieving the writer’s spleen,

but a flavour of the event by featuring actually harmful. but what about the recipient?

to disturb anyone) of the final weekend perception that for a long time the needs messages immediately, or, if I do that, I

(when many players had already gone and interests of the average player were not leave my reply in the ‘Drafts’ folder, and

home). In short, the photos we did not the authorities’ main concern. This is now check it again the next day. If my tone was

feature were those we did not have! changing, for the EBU knows that if bridge civil, I then click on ‘Send’ ; if not, I re-

As for the second complaint, yes, I am is to survive in this country it will be not write, and check again later.

players featured on the February cover, so medals (even though the media are not be good if a number (not, I am glad to say,

let’s put that right. They were, left to right: interested in reporting our successes) but the majority) of EBU members would

Top row: Howard Melbourne, Gunnar also because the bene fits that the game follow my example, especially if they want

Hallberg, Jeremy Dhondy, Justin Hackett, brings to society are recognised by the gov- their missives published. Unless they’re

Nick Sandqvist, Ed Jones, Michael Byrne, ernment and individuals alike. Consequent- civil, they won’t be. Nor will they be pub-

Gary Hyett. ly, the Union has become much more club- lished if they go on forever; other people

Row 2: Graham Osborne, Jim Gobert, focused and attuned to the interests of the also have views they want to express. And

Janet de Botton, Bill Hirst, John Holland, average player – as I hope the development finally, if I am in any doubt, I might choose

Martin Garvey. of this magazine, for example, shows. not to publish unless the name of the sender

Row 3: Fiona Brown, Espen Erichsen, John However, this does not mean that the is accompanied by a postal address: don’t

Hassett, Colin Simpson, Heather Dhondy, average practitioners have to be completely hide in cyberspace! If you feel strongly

Glyn Liggins. without aspirations, or that they should be enough about some thing to write to

Artur Malinowski, Derek Patterson, Peter our duplicate sessions more if we do well • Mind your manners.

Crouch, David Gold. – even if our main reason for playing is • Maximise the impact of what you

Row 5: Alex Gipson, Ben Paske, Susan the social interaction a club affords. It is write by being succinct.

Stockdale, Alexander Allfrey, David Price, now fashionable in some quarters to use • Sign your communication like a man

Andrew McIntosh. ‘competitiveness’ as a synonym for ‘unpleas- by adding at least the name of the

Row 6: Jason Hackett, Nevena Senior, Tony antness’ but it is the attitude some players town where you live (we can omit

Forrester, Michelle Brunner, Richard display, not their level of bridge compe- such details on publication if you

johnson, Nick Smith, Stuart McPhee. tence, that makes them pleasant or unpleas- wish). Knowing one is dealing with

Row 7: Richard Palmer, Alan Kay. ant at the table. There is nothing wrong ‘Joe Bloggs of Tunbridge Wells’ is so

Row 8: Paul Gipson, Brian Senior, Chris with trying to improve and reach a level much more satisfying than replying to

Dixon, Tony Waterlow, Tom Townsend, one is comfortable with – and there is a disembodied jbloggs@hotmail.com.

Paul Hackett, Willie Whittaker. much to be commended in having a I hope to hear from you soon . . . J