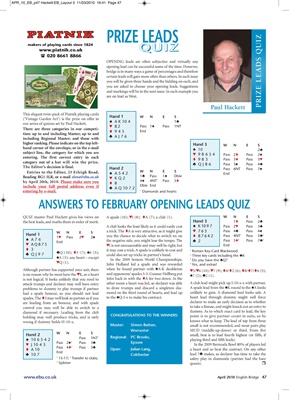 OPENING leads are often subjective and virtually any

opening lead can be successful some of the time. However,

bridge is in many ways a game of percentages and therefore

certain leads will gain more often than others. In each issue

you will be given three hands and the bidding on each, and

you are asked to choose your opening leads. Suggestions

and markings will be in the next issue. In each example you

are on lead as West.

(‘Vintage Garden Art’) is the prize on offer in

There are three categories in our competi-

tion: up to and including Master; up to and

including Regional Master; and those with ♣ AJ76

category out of a hat will win the prize.

include your full postal address even if Dble End

the best leads, and marks them in order of merit. Hand 3 1t Pass 2♣

™ AQ875 ™J is not unreasonable and may well be right, but End

t 3 it may cost a trick. A spade is unlikely to cost and 1

could also set up tricks in partner’s hand. 2

Three key cards including the ♣K

is not logical. It looks unlikely that you need to John back in with the tA for two down. In the

attack trumps and declarer may well have entry other room a heart was led, so declarer was able A club lead might pick up J-10-x-x with partner.

had a spade honour, so you should not lead mond on the third round of hearts, and lead up unlikely to gain. A diamond lead looks safe. A

spades. The t3 may well look to partner as if you to the ´Q-J-x to make his contract. heart lead through dummy might well force

are leading from an honour, and with spade declarer to make an early decision as to whether

control you may well be able to switch to a to take a finesse, and might knock out an entry to

diamond if necessary. Leading from the club dummy. As to which exact card to lead, the key

CONGRATULATIONS TO THE WINNERS: point is to give partner count in suits, so he

holding may well produce tricks, and is only

wrong if dummy holds H-10-x. knows what to keep. The lead of top from three

Master: Simon Batten, small is not recommended, and most pairs play

small, best is to lead fourth highest (or fifth, if

t A 10 Open: Julian Lang, a heart and so beat the contract. On any other

15-17; 2 Transfer to clubs; safety play in diamonds (partner had the bare