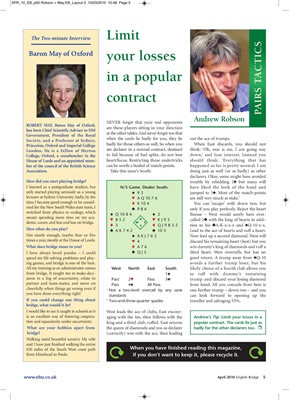 Baron May of Oxford

NEVER forget that your real opponents

ROBERT MAY, Baron May of Oxford,

are those players sitting in your direction

has been Chief Scientific Adviser to HM

Government, President of the Royal

at the other tables. And never forget too that

Society, and a Professor at Sydney, when the cards lie badly for you, they lie out the ace of trumps.

Princeton, Oxford and Imperial College badly for those others as well. So when you When East discards, you should not

London. He is a Fellow of Merton are declarer in a normal contract, destined think: ‘Oh, woe is me, I am going way

College, Oxford, a crossbencher in the to fail because of bad splits, do not lose down,’ and lose interest. Instead you

House of Lords and an appointed mem- heart/focus. Restricting those undertricks should think: ‘Everything that has

ber of the council of the British Science can be worth a bushel of match-points. happened so far is pretty normal. I am

Association. Take this issue’s South: doing just as well (or as badly) as other

How did you start playing bridge? trouble by rebidding 2´ but many will

I learned as a postgraduate student, but N/S Game. Dealer South. have liked the look of the hand and

only started playing seriously as a young ´ 93 jumped to 3´. Most of the match-points

time I became good enough to be consid- t K 10 4 You can ‘escape’ with down two, but

ered for the New South Wales state team, I ® 986 only if you play perfectly. Reject the heart

demic career, and less and less on bridge. W E

Not nearly enough, maybe four or five ´ AKJ765 Now lead up a second diamond. West will

times a year, mostly at the House of Lords. ™ 4 discard his remaining heart (best) but you

What does bridge mean to you? t A76 win dummy’s king of diamonds and ruff a

I have always loved puzzles – I could ® QJ5 third heart. West overruffs, but has no

spend my life solving problems and play- good return. A trump away from ´Q-10

ing games, and bridge is one of the best. avoids a further trump loser, but his

from bridge. It taught me to make deci- 1´ to ruff with dummy’s remaining

sions in a fog of uncertainty, relate to Pass1 2™ Pass 3´2 trump and discard your losing diamond

partner and team-mates, and move on Pass 4´ All Pass from hand. All you concede from here is

cheerfully when things go wrong even if 1

you have done everything right! standards can look forward to opening up the

If you could change one thing about 2

bridge, what would it be?

I would like to see it taught in schools as it West leads the ace of clubs, East encour-

is an excellent way of fostering coopera- aging with the ten, then follows with the Andrew’s Tip: Limit your losses in a

tion and equanimity under uncertainty. king and a third club, ruffed. East returns popular contract. The cards lie just as

What are your hobbies apart from the queen of diamonds and you as declarer badly for the other declarers too. r

bridge? (correctly) win with the ace, then leading

Walking amid beautiful scenery. My wife

and I have just finished walking the entire

630 miles of the South West coast path When you have finished reading this magazine,

from Minehead to Poole. if you don’t want to keep it, please recycle it.