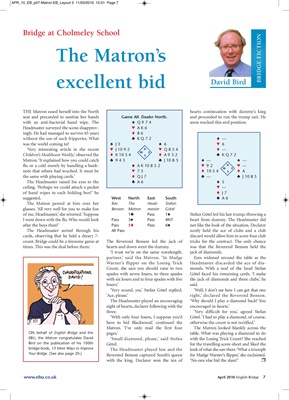 with an anti-bacterial hand wipe. The ´ Q974 soon reached this end position:

ceiling. ‘Perhaps we could attach a packet ™ —

of hand wipes to each bidding box?’ he t J7

The Matron peered at him over her Rev. The Head- Stefan

glasses. ‘All very well for you to make fun Benson Matron master Götel

of me, Headmaster,’ she retorted. ‘Suppose 1® Pass 1´ Stefan Götel led his last trump, throwing a

I went down with the flu. Who would look Pass 3´ Pass 4NT heart from dummy. The Headmaster did

after the boys then?’ Pass 5t Pass 6´ not like the look of the situation. Declarer

cards, observing that he held a dreary 7- discard would allow him to score four club

count. Bridge could be a tiresome game at The Reverend Benson led the jack of tricks for the contract. The only chance

times. This was the deal before them: hearts and down went the dummy. was that the Reverend Benson held the

‘I trust we’re on the same wavelength, jack of diamonds.

partner,’ said the Matron. ‘In Madge Eyes widened around the table as the

Count, she says you should raise to two monds. With a nod of the head Stefan

with six losers and to four spades with five the jack of diamonds and three clubs,’ he

‘Very sound, yes,’ Stefan Götel replied. ‘Well, I don’t see how I can get that one

The Headmaster played an encouraging ‘Why should I play a diamond back? You

eight of hearts, declarer following with the encouraged in hearts.’

‘With only four losers, I suppose you’d Götel. ‘I had to play a diamond, of course,

have to bid Blackwood,’ continued the otherwise the count is not rectified.’

Matron. ‘I’ve only read the first four The Matron looked blankly across the

ON behalf of English Bridge and the pages.’ table. What was playing a diamond to do

Bird on the publication of his 100th Götel. for the travelling score-sheet and liked the

bridge book, 10 More Ways to Improve The Headmaster played low and the look of what she saw there. ‘What a triumph

with the king. Declarer won the ten of ‘No-one else bid the slam!’ r