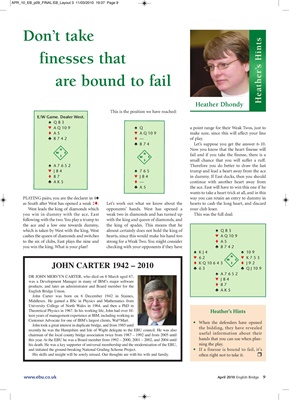 are bound to fail

This is the position we have reached:

N Now you know that the heart finesse will

fail and if you take the finesse, there is a

S small chance that you will suffer a ruff.

´ A7652 Therefore you do better to draw the last

® AK5 t — continue with another heart away from

® A5 the ace. East will have to win this one if he

wants to take a heart trick at all, and in this

PLAYING pairs, you are the declarer in 4´ way you can retain an entry to dummy in

as South after West has opened a weak 2t. Let’s work out what we know about the hearts to cash the long heart, and discard

West leads the king of diamonds which opponents’ hands. West has opened a your club loser.

you win in dummy with the ace, East weak two in diamonds and has turned up This was the full deal:

following with the two. You play a trump to with the king and queen of diamonds, and

the ace and a low one towards dummy, the king of spades. This means that he

which is taken by West with the king. West almost certainly does not hold the king of ´ Q83

cashes the queen of diamonds and switches hearts, since this would make his hand too ™ A Q 10 9

to the six of clubs, East plays the nine and strong for a Weak Two. You might consider t A5

you win the king. What is your plan? checking with your opponents if they have ® 8742

was a Development Manager in many of IBM’s major software

products, and later an administrator and Board member for the t 87

John Carter was born on 6 December 1942 in Staines,

Middlesex. he gained a BSc in Physics and Mathematics from

University College of north Wales in 1964, and then a PhD in

theoretical Physics in 1967. In his working life, John had over fif- Heather’s Hints

teen years of management experience at IBM, including working as

Customer advocate for one of IBM’s largest clients, Wal*Mart.

John took a great interest in duplicate bridge, and from 1985 until • When the defenders have opened

recently he was the hampshire and Isle of Wight delegate to the eBU council. he was also

the bidding, they have revealed

his death. he was a key supporter of universal membership and the modernisation of the eBU, ning the play.

and initiated the ground-breaking national Grading Scheme Project. • If a finesse is bound to fail, it’s

his skills and insight will be sorely missed. our thoughts are with his wife and family. often right not to take it. r