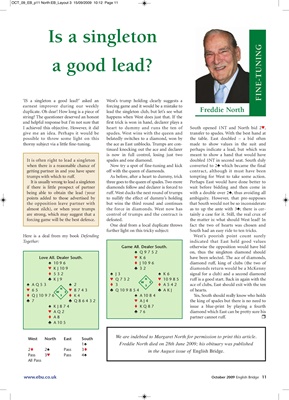 ‘IS a singleton a good lead?’ asked an West’s trump holding clearly suggests a

duplicate. Oh dear! How long is a piece of lead the singleton club, but let’s see what Freddie North

string? The questioner deserved an honest happens when West does just that. If the

and helpful response but I’m not sure that first trick is won in hand, declarer plays a

I achieved this objective. However, it did heart to dummy and runs the ten of South opened 1NT and North bid 2™,

give me an idea. Perhaps it would be spades. West wins with the queen and transfer to spades. With the best hand at

possible to throw some light on this belatedly switches to a diamond, won by the table. East doubled – a bid often

thorny subject via a little fine-tuning. the ace as East unblocks. Trumps are con- made to show values in the suit and

tinued knocking out the ace and declarer perhaps indicate a lead, but which was

is now in full control, losing just two meant to show a hand that would have

It is often right to lead a singleton spades and one diamond. doubled 1NT in second seat. South duly

getting partner in and you have spare off with the queen of diamonds. contract, although it must have been

trumps with which to ruff. As before, after a heart to dummy, trick tempting for West to take some action.

It is usually wrong to lead a singleton three goes to the queen of spades. Two more Perhaps East would have done better to

being able to obtain the lead (your ruff. West ducks the next round of trumps with a double over 2´, thus avoiding all

points added to those advertised by to nullify the effect of dummy’s holding ambiguity. However, that pre-supposes

almost zilch), or when your trumps the force in diamonds. West now has as to up the ante with 3´; there is cer -

are strong, which may suggest that a control of trumps and the con tract is tainly a case for it. Still, the real crux of

forcing game will be the best defence. defeated. the matter is: what should West lead? In

further light on this tricky subject: South had an easy ride to ten tricks.

Game All. Dealer South. otherwise the opposition would have bid

´ Q9752 on, thus the singleton diamond should

Love All. Dealer South. ™ K6 have been selected. The ace of diamonds,

West North East South We are indebted to Margaret North for permission to print this article.

1´ Freddie North died on 28th June 2009; his obituary was published

2t 2´ Pass 3t in the August issue of English Bridge.