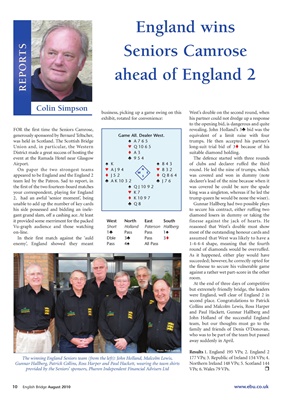 Colin Simpson business, picking up a game swing on this West’s double on the second round, when

exhibit, rotated for convenience: his partner could not dredge up a response

to the opening bid, is dangerous and quite

FOR the first time the Seniors Camrose, revealing. John Holland’s 3® bid was the

generously sponsored by Bernard Teltscher, Game All. Dealer West. equivalent of a limit raise with four

was held in Scotland. The Scottish Bridge ´ A765 trumps. He then accepted his partner’s

District made a great success of hosting the t A3 suitable diamond holding.

Airport. ´ K ´ 843 of clubs and declarer ruffed the third

your correspondent, playing for England ™ K7 king was a singleton, whereas if he led the

his side possessed and bidding an inele- to secure his contract, either ruffing two

gant grand slam, off a cashing ace. At least diamond losers in dummy or taking the

it provided some merriment for the packed West North East South finesse against the jack of hearts. He

on-line. 1® Pass Pass 1´ most of the outstanding honour cards and

enemy’, England showed they meant Pass 4´ All Pass 1-4-4-4 shape, meaning that the fourth

round of diamonds would be overruffed.

As it happened, either play would have

succeeded; however, he correctly opted for

the finesse to secure his vulnerable game

against a rather wet part-score in the other

At the end of three days of competitive

but extremely friendly bridge, the leaders

were England, well clear of England 2 in

and Paul Hackett, Gunnar Hallberg and

John Holland of the successful England

team, but our thoughts must go to the

family and friends of Denis O’Donovan,

who was to be part of the team but passed

away suddenly in April.