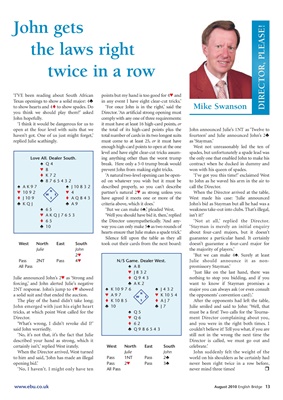 twice in a row

Texas openings to show a solid major: 4® in any event I have eight clear-cut tricks.’

to show hearts and 4t to show spades. Do ‘For once John is in the right,’ said the Mike Swanson

you think we should play them?’ asked Director. ‘An artificial strong opening must

John hopefully. comply with any one of three requirements:

‘I think it would be dangerous for us to it must have at least 16 high-card points, or

haven’t got. One of us just might forget,’ total number of cards in its two longest suits fourteen’ and Julie announced John’s 2®

replied Julie scathingly. must come to at least 25, or it must have as ‘Stayman.’

level and have eight clear-cut tricks assum- spades, but unfortunately a spade lead was

Love All. Dealer South. ing anything other than the worst trump the only one that enabled John to make his

´ Q4 break. Here only a 5-0 trump break would contract when he ducked in dummy and

™ 8 prevent John from making eight tricks. won with his queen of spades.

t K72 ‘A natural two-level opening can be open- ‘I’ve got you this time!’ exclaimed West

™ 4 partner’s natural 2™ as strong unless you When the Director arrived at the table,

® KQJ ® A9 criteria above, which it does.’ John’s bid as Stayman but all he had was a

hearts ensure that Julie makes a spade trick.’ about four-card majors, but it doesn’t

Silence fell upon the table as they all guarantee a particular hand. It certainly

West North East South took out their cards from the next board: doesn’t guarantee a four-card major for

Julie John the majority of players.’

All Pass ´ A8 promissory Stayman.’

Julie announced John’s 2™ as ‘Strong and t Q943 nothing to stop you bidding, and if you

John emerged with just his eight heart ® 10 ® J7 Julie smiled and said to John: ‘Well, that

tricks, at which point West called for the ´ Q5 must be a first! Two calls for the Tourna-

‘No, it’s not that, it’s the fact that Julie still not in the wrong the next time the

described your hand as strong, which it Director is called, we must go out and

When the Director arrived, West turned Julie John John suddenly felt the weight of the

to him and said, ‘John has made an illegal Pass 1NT Pass 2® world on his shoulders as he certainly had

opening bid.’ Pass 2™ Pass 3® never been right twice in a row before,

‘No, I haven’t. I might only have ten All Pass never mind three times! r