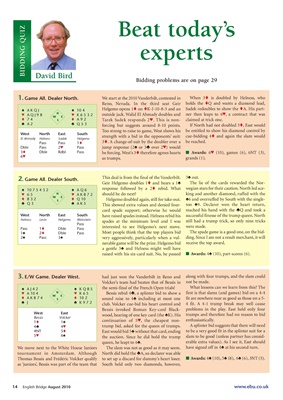 1. Game All. Dealer North. We start at the 2010 Vanderbilt, contested in When 3t is doubled by Helness, who

Reno, Nevada. In the third seat Geir holds the tQ and wants a diamond lead,

N ner then leaps to 6™, a contract that was

Too strong to raise to game, West shows his be entitled to show his diamond control by

strength with a bid in the opponents’ suit: cue-bidding 4t and again the slam would

Pass Pass 1t 3t. A change-of-suit by the doubler over a be reached.

2. Game All. Dealer South. This deal is from the final of the Vanderbilt. 3´ out.

card spade support; otherwise he would reached his hand with the ®Q and took a

Helness Levin Helgemo Weinstein still had a trump trick, so only nine tricks

spades at the minimum level and I was

Pass 1t Dble Pass interested to see Helgemo’s next move. were made.

1´ 2t Dble Pass Most people think that the top players bid The spade game is a good one, on the bid-

2´ Pass 3´ very aggressively, particularly when a vul- ding. Since I am not a result merchant, it will

nerable game will be the prize. Helgemo bid receive the top award.

3. E/W Game. Dealer West. had just won the Vanderbilt in Reno and along with four trumps, and the slam could

Volcker’s team had beaten that of Bessis in not be made.

´ AJ42 ´ KQ85 the semi-final of the French Open trials! What lessons can we learn from this? The

West East trumps and therefore had no reason to bid

4® 4™ trump bid, asked for the queen of trumps. A splinter bid suggests that there will need

4NT 5t East would bid 5´ without that card, ending to be a very good fit in the splinter suit for a

5™ 6´ the auction. Since he did hold the trump slam to be good (unless partner has consid-

queen, he leapt to 6´. erable extra values). As I see it, East should

We move next to the White House Juniors The slam was not as good as it may seem. have signed off in 4´ at his second turn.

tournament in Amsterdam. Although North did hold the ®A, so declarer was able

as ‘juniors’, Bessis was part of the team that South held only two diamonds, however,