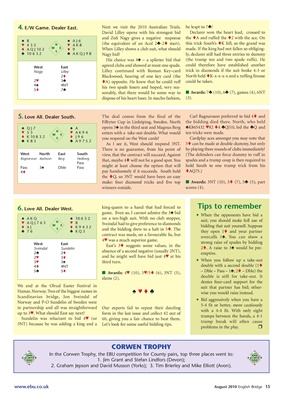 and Zoli Nagy gives a negative response the tA and ruffed the t2 with the ace. On

t 9 When Lilley shows a club suit, what should made. If the king had not fallen so obliging-

His choice was 4´ – a splinter bid that (the trump ten and two spade ruffs). He

West East agreed clubs and showed at most one spade. could therefore have established another

2t Blackwood, hearing of one key card (the North held tK-x-x-x-x and a ruffing finesse

dispose of his heart loser. In macho fashion, (3).

5. Love All. Dealer South. The deal comes from the final of the Carl Ragnarsson preferred to bid 4t and

Filbyter Cup in Linköping, Sweden. North the bidding died there. North, who held

™ AK94 enters with a take-out double. What would ten tricks were made.

As I see it, West should respond 3NT. 5t can be made at double-dummy, but only

There is no guarantee, from his point of by playing three rounds of clubs immediately!

West North East South view, that the contract will succeed. Against (The defenders can force dummy to ruff in

that, maybe 4t will not be a good spot. You spades and a trump coup is then required to

the tQ, so 3NT would have been an easy

6. Love All. Dealer West. king-queen to a hand that had forced to Tips to remember

game. Even so, I cannot admire the 3´ bid

S and the bidding drew to a halt in 5t. The

contract was made, on a favourable lie, but

overcalls 1´. You can show a

4™ was a much superior game.

East’s 3t suggests some values, in the

double with a second

denies four-card support for the

We end at the Olrud Easter Festival in suit that partner has bid; other-

Hamar, Norway. Two of the biggest names in ´ ™t® wise you would raise instead.

Norway and P-O Sundelin of Sweden were • Bid fit or better,when you have a

up to 3™. What should East say next? form in the last issue and collect 42 out of

trumps between the hands, a 4-1

Sundelin was reluctant to bid 4™ (or 60, giving you a fair chance to beat them.

trump break will often cause

3NT) because he was adding a king and a Let’s look for some useful bidding tips.

problems in the play. r

In the Corwen Trophy, the EBU competition for County pairs, top three places went to: