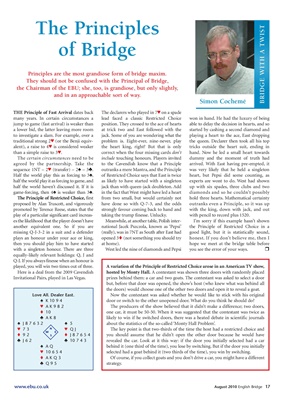 Principles are the most grandiose form of bridge maxim.

They should not be confused with the Principal of Bridge,

the Chairman of the EBU; she, too, is grandiose, but only slightly,

and in an approachable sort of way.

many years. In certain circumstances a lead faced a classic Restricted Choice won in hand. He had the luxury of being

jump to game (fast arrival) is weaker than position. They crossed to the ace of hearts able to delay the decision in hearts, and so

a lower bid, the latter leaving more room at trick two and East followed with the started by cashing a second diamond and

to investigate a slam. For example, over a jack. Some of you are wondering what the playing a heart to the ace, East dropping

traditional strong 2™ (or the Benji equiv- problem is. Eight-ever, nine-never, play the queen. Declarer then took all his top

alent), a raise to 4™ is considered weaker the heart king, right? But that is only tricks outside the heart suit, ending in

than a simple raise to 3™. correct when the four missing cards don’t hand. Now he led a small heart towards

The certain circumstances need to be include touching honours. Players invited dummy and the moment of truth had

agreed by the partnership. Take the to the Cavendish know that a Principle arrived. With East having pre-empted, it

Half the world play this as forcing to 3´, of Restricted Choice says that East is twice heart, but Pepsi did some counting, as

half the world play it as forcing to game, and as likely to have started with a singleton experts are wont to do. West had shown

half the world haven’t discussed it. If it is jack than with queen-jack doubleton. Add up with six spades, three clubs and two

game-forcing, then 4´ is weaker than 3´. in the fact that West might have led a heart diamonds and so he couldn’t possibly

The Principle of Restricted Choice, first from two small, but would certainly not hold three hearts. Mathematical certainty

proposed by Alan Truscott, and vigorously have done so with Q-7-3, and the odds outranks even a Principle, so it was up

promoted by Terence Reese, states that the strongly favour coming back to hand and with the king, down with jack, and out

play of a particular significant card increas- taking the trump finesse. Unlucky. with pencil to record plus 1520.

es the likelihood that the player doesn’t have Meanwhile, at another table, Polish inter- I’m sorry if this example hasn’t shown

another equivalent one. So if you are national Jacek Pszczola, known as ‘Pepsi’ the Principle of Restricted Choice in a

missing Q-J-3-2 in a suit and a defender (really), was in 7NT as South after East had good light, but it is statistically sound,

plays an honour under your ace or king, opened 3t (not something you should try honest. If you don’t believe me, then I

then you should play him to have started at home). hope we meet at the bridge table before

with a singleton honour. There are three West led the nine of diamonds and Pepsi you see the error of your ways. r

Q-J. If you always finesse when an honour is

played, you will win two times out of three. A variation of the Principle of Restricted Choice arose in an American TV show,

Here is a deal from the 2009 Cavendish hosted by Monty Hall. A contestant was shown three doors with randomly placed

Invitational Pairs, played in Las Vegas. prizes behind them: a car and two goats. The contestant was asked to select a door

but, before that door was opened, the show’s host (who knew what was behind all

the doors) would choose one of the other two doors and open it to reveal a goat.

Love All. Dealer East. Now the contestant was asked whether he would like to stick with his original

™ AK982 The producers of the show believed that it didn’t make a difference; two doors,

® AK8 likely to win if he switched doors, there was a heated debate in scientific journals

´ AQ behind it (one third of the time), you lose by switching. But if the door you initially

t AKQ3 Of course, if you collect goats and you don’t drive a car, you might have a different