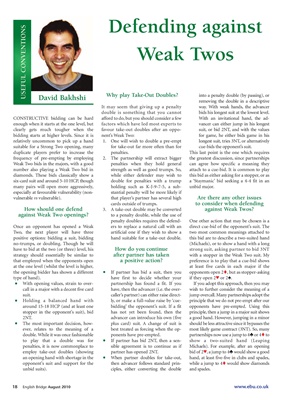 Why play Take-Out Doubles? into a penalty double (by passing), or

David Bakhshi removing the double in a descriptive

It may seem that giving up a penalty way. With weak hands, the advancer

double is something that you cannot bids his longest suit at the lowest level.

CONSTRUCTIVE bidding can be hard afford to do, but you should consider a few With an invitational hand, the ad-

enough when it starts at the one level, but factors which have led most experts to vancer can either jump in his longest

clearly gets much tougher when the favour take-out doubles after an oppo- suit, or bid 2NT, and with the values

bidding starts at higher levels. Since it is nent’s Weak Two: for game, he either bids game in his

relatively uncommon to pick up a hand 1. One will wish to double a pre-empt longest suit, tries 3NT, or alternatively

suitable for a Strong Two opening, many for take-out far more often than for cue-bids the opponent’s suit.

duplicate players prefer to increase the penalties. This last point is the one which requires

frequency of pre-empting by employing 2. The partnership will extract bigger the greatest discussion, since partnerships

Weak Two bids in the majors, with a good penalties when they hold general can agree how specific a meaning they

number also playing a Weak Two bid in strength as well as good trumps. So, attach to a cue-bid. It is common to play

diamonds. These bids classically show a while either defender may wish to this bid as either asking for a stopper, or as

six-card suit and around 5-10 HCP, though double for penalties with a trump a ‘Staymanic’ bid seeking a 4-4 fit in an

many pairs will open more aggressively, holding such as K-J-9-7-5, a sub- unbid major.

vulnerable vs vulnerable). that player’s partner has several high Are there any other issues

cards outside of trumps. to consider when defending

How should one defend 3. A take-out double may be converted against Weak Twos?

against Weak Two openings? to a penalty double, while the use of

Once an opponent has opened a Weak ers to replace a natural call with an direct cue-bid of the opponent’s suit. The

Two, the next player will have three artificial one if they wish to show a two most common meanings attached to

positive options: bidding a suit, bidding hand suitable for a take-out double. this bid are to describe a two-suited hand

no-trumps, or doubling. Though he will (Michaels), or to show a hand with a long

have to bid at the two (or three) level, his How do you continue strong suit, asking partner to bid 3NT

strategy should essentially be similar to after partner has taken with a stopper in the Weak Two suit. My

that employed when the opponents open a positive action? preference is to play that a cue-bid shows

at the one level (whilst the level is higher, at least five cards in each major if the

the opening bidder has shown a different

• If partner has bid a suit, then you

have first to decide whether your

opponents open 2t, but as stopper-asking

• With opening values, strain to over-

call in a major with a decent five card

partnership has found a fit. If you

have, then the advancer (i.e. the over-

If you adopt this approach, then you may

wish to further consider the meaning of a

suit. caller’s partner) can either raise direct- jump overcall. Many partnerships adopt the

• Holding a balanced hand with

ly, or make a full-value raise by ‘cue-

bidding’ the opponent’s suit. If a fit

principle that we do not pre-empt after our

opponents have pre-empted. Using this

stopper in the opponent’s suit), bid has not yet been found, then the principle, then a jump in a major suit shows

2NT. advancer can introduce his own (five a good hand. However, jumping in a minor

• The most important decision, how-

ever, relates to the meaning of a

plus card) suit. A change of suit is

best treated as forcing when the op-

should be less attractive since it bypasses the

most likely game contract (3NT). So, many

double. While it was once fashionable ponents have pre-empted. partnerships now use a jump to 4® or 4t to

to play that a double was for

penalties, it is now commonplace to

sible agreement is to continue as if

Michaels). For example, after an opening

employ take-out doubles (showing partner has opened 2NT. bid of 2™, a jump to 4® would show a good

an opening hand with shortage in the

opponent’s suit and support for the

• When partner doubles for take-out,

hand, at least five-five in clubs and spades,

while a jump to 4t would show diamonds

unbid suits). ciples, either converting the double and spades.